New QTH has space but also has its challenges.

The site is seventeen acres, though largely wooded making antenna placement difficult. With the leaves down I am spending much time outside evaluating potential antenna and tower locations.

The property has extensive groomed trails where the previous owner loved to ride his grandchildren about on his golf cart.

Here is are some typical scenes – meandering small streams and trails with mature woods that need some catch-up attention:

The property has many streams and roads.

An example of the roads. Most are further covered with canopy.

I’ve decided to locate my radio room in an outbuilding.  Originally a pole-building a 14 ft x 30 ft shop had been basically built inside the pole building.  In the next picture anything with a yellow highlight is what I am adding, as I am moving the “Rough Workshop” to newly constructed 18 ft x 22 ft work space, and adding a new 12 ft  x 10 ft closet & toilet for the original work space, now radio room.

I did a sketch for the XYL (and no we don’t have a mini van or mini cooper or tiny tractors, but that was what was available in the modeling software):

Here is a quick shot of the 14 x 30 radio room at the start of remodeling: 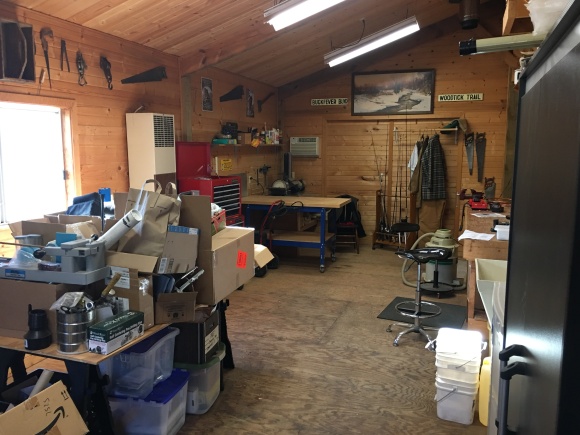 Future Radio Room (notice the Flex-6600M and PGXL under the bench – in boxes, alas…)

And here is an early shot of the partition wall for the new Rough Work Shop: 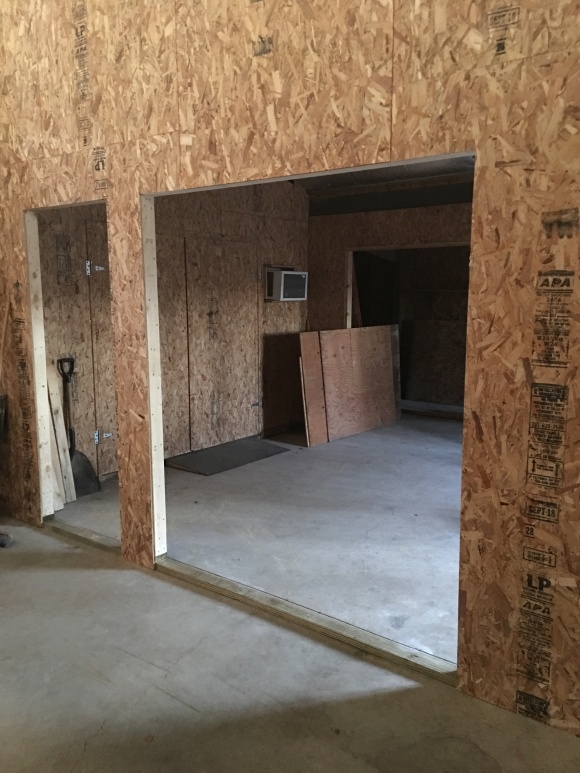 Building the new Rough Shop Area where sawdust won’t be such an issue.

On the plus side the new radio room has both 120v and 240v power, natural gas heat, air conditioned, seasonal water, phone and internet.  It is about 200 ft from the main house.

On the downside the insurance company made me remove the woodburner when I bought the property, the water is seasonal which means the pipes will freeze if not blown out for winter, and the only way to put a toilet in was to install a combustion toilet.

I’m working on a layout of the inside, as I would prefer to leave doors and windows as they are if possible.

I’m expecting to also use the Radio Room for some of my other hobbies.  Expect there will be some instrument repairs, electronic kit building, and possibly some general tinkering in its future.

Because I need ready access to water and drainage, and more controlled temperatures, my Kombucha Brewing will end up in the main house.  Finished bottles along with brewskis will of course be a staple offering in the new Radio Room.

Also in the main house will a remote operating station in my office – though as the two buildings are on the same LAN it isn’t really all that remote is it?

The big challenge is figuring out antenna and tower locations.  The most open spots would be in conflict with aesthetics and utility.  The largest open  space had been an orchard which I had help plant 40 years ago, and will be replanted.  I’ve picked out two areas where I could thin the woods enough to create the space needed, and not be too far from the radio room.

Can I get into FT8?  Technically for sure, but as an intellectual engagement I’m stuck in a quandary.

It is not that I lack the gear or the experience to run another digital mode – I’ve tons of contacts on PSK31/PSK63, Hellschreiber, and most of that wave of modes including Throb.  Then I played with some Olivia/Contessa type modes.  I’ve only dabbled with the semi-automated modes which include FT8.

In the day I even completed the ARRL’s online classes for digital, and ever took first place in one obscure digital contest – most likely because I was the only one who read the rules realizing that the multipliers were too generous compared to pure raw numbers of QSOs.

A lot of my digital radio time was through necessity.  While my voice is not a “radio voice” it would travel through the house if I went on the air SSB once our young children were put to bed, the majority of the time I had available for radio was late after the bands shut down for SBB, and I didn’t have very good antennas available – so digital was my solution.  I even bought a “no-click keyboard” keep from disturbing the house when I was operating, as I’d learned our small children would grasp at the noise as an excuse from their evening routines and sleep.

But over time the kids got older – they became the evening/night noise makers keep us from our sleep!  The bands became marginally better.  And I invested in a tower and decent antennas.  Oh, and I figure out how to use the equipment & later software better so my voice worked as a “radio voice.”

And I found I preferred talking over typing.  Actually more accurately I found I could do a voice QSO at the same time as doing emails or other typing.

When I started working PSK it was hand-typing everything.  Avoided Macros and used the typing as a way to keep my keyboard skills up.  I even ran some PSK63 events hand typing, but started using Macros to run faster versions of PSK and because I wasn’t all that satisfied with my PSK QSOs.

It is hard to get your personality to come over typing.

I started running more Hellschreiber largely because I thought the mode was cool & retro, and different enough to be interesting.  Not the best mode to run though as unless there is a published event few hams monitor for a Hellschreiber CQ.

Staring into the increasingly automated modes didn’t last long for me.

While I was technically fascinated the QSO’s became more about Macro’s, computer clock timing, and then even character limited.  FT8 is of course just a flavor in the continuum.

While I have a Twitter account I never spend any time on Twitter, though I do let announcements of my radio postings “tweet” automatically.  Have to admit that part of the account is to “control” the user name that matches my call sign.  A good hacker or any other technical glitch could end that of course.

So back to FT8 – while I have had the software up and running, done a few QSOs and figured out how to get all the software I’d like to run playing well with each other, I didn’t get “the buzz.”

Letting the machine manage a series of FT8 contacts feeling like pushing the graph command back in Lotus 1-2-3 days – the “gee-wiz” fades to a “meh” after a few repetitions.

Wonder if I am alone on this or if I’m just missing something?

Thinking I will set everything up to run FT8 again and maybe set a quick goal of an FT8 WAS (Work All States) or take a stab at a  FT8 DXCC to see if I’ve stopped running FT8 too quickly and before the “bug sets in?”

Or I may find that already know the answer – that I need to do QSOs on modes where more personality is shared.