First look at the Flexradio Maestro at Dayton Hamvention 2015 – YouTube

Also a photo of Howard KY6LA holding a unit: 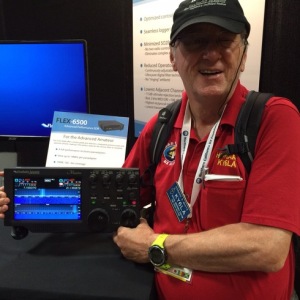 KY6LA with a FRS Maestro Prototype

And a concept for station design by Beppe IK3VIG: 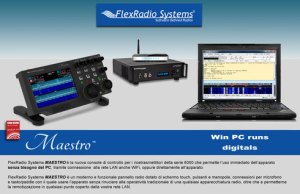 A link to the FRS Maestro Page:  http://www.flexradio.com/amateur-products/flex-6000-signature-series/maestro/

(Please follow the link there for the latest pdf specification sheet on the Maestro).

Here is another shot courtesy of Jeff KE9V: 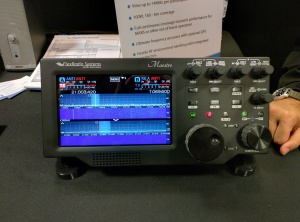 I have mine on order.  Will be VERY useful the way I operate.

Hard to imagine that Dayton Hamvention 20115 is just over a week away!

Planning to take in the Collins Collectors Association Dinner on Friday Evening and the FlexRadio Systems Banquet on Saturday evening.

Of huge interest is what new thing(s) will Hamvention 2015 bring?

The first generation of Touch-Screen HT’s is here, adding soft-key functionality to the HT format.  If having your HT act like your Smartphone is you bag, you will love these new HTs.

There a a raft of new exciting small-SDR receivers and transceivers, many at low enough price points that most anyone can join the SDR game.

Though there is no announcement and as usual FlexRadio Systems’ information release discipline impressively has not put legs to any buzz yet, I am expecting to at a minimum a major point release of SmartSDR even though the 1.4.x release is still only weeks old, and I’ll go on a limb to predict at least a public beta of the functionality of SmartSDR 2.0.x if not a release.  This will be the long awaited WAN-enabled version that lets scenarios like working from my home station from my office desk miles away become routine rather than technically advanced.  I am also predicting a QRP/low-power single slice radio either positioned between the last production PowerSDR radio the Flex-1500 and the current value leader SmartSDR Flex-6300, or as a replacement to the Flex-1500.  We may see significant either third party produced or FlexRadio System marketed additional software options and/or hardware options.  Wondering if a native-OS-X version of SmartSDR might be at least shown?

The mainstream radio producers will continue to push evolutionary improvements of what is largely their present platforms, but don’t be surprised if at least one or more either show or are talking about a new SDR version.

Hoping that some of the rumored shack-integration developments are seen in real products.

Unanswered is whether the recently corporately reconfigured RF Concepts Alpha & TenTec ownership will be ready to offer new radios and the long overdue Alpha 4040 Autotuner?  The recent ownership change may push off expected launches, or again may not?  We will have to wait to see.

The market for high-end designer CW Keys seems prime for some new product launches.  With some of the consolidation with Bencher folded into Vibroplex, perhaps they will have new models to show – maybe even a new premium line product?

The strong dollar may bring in some more of the excellent Euro_Gear we read about but seldom see.

More thoughts will be posted over the run up to my travels to Dayton.

Planning SSB 20m & 15m ﻿unless band conditions are poor. We’re equipped to do 80-6m if needed.
Usual fall back if bands are to weak for SBB QSOs.
If bad bands we will a switch to digital – most likely PSK31 at the usual calling frequencies.

Weather will have a lot of impact of course. We won’t be able to run if it is lightening or raining (and despite a cold cold spring it better not snow again until winter!!)

We have tentative additional operators, but no one has confirmed as of this morning.
W9JSB is bringing his bag of QRP tricks along, and possible may join on Friday night for Step-In Island WI039R operations as well.