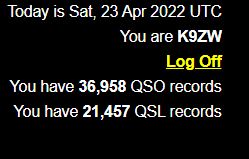 It takes a while to build up the QSOs and QSLs in one’s logs.  Seems that of the QSOs I upload to LoTW about 58% end up being confirmed by other LoTW users, becoming LoTW-Qualified QSOs.

I’m understanding that percentage is a fairly typical result.

At my present weekly QSO rate, I am expecting to cross the 40-thousand QSO mark later in August 2022.

As often mentioned in my posts, I have long figured out a way to run an instance of FT8 remotely which gets exercised from my office desk.

Propagation has changed this week, perhaps as a result of the CME (Coronal Mass Ejection) that excited the Earth’s electromagnetic “spheres” recently.

Been able to make FT8 contacts 160m through 10m daily, but so far nothing heard on 6m. For me this week 6m remains dead.

Then it is possible to run 17, 15 and 12m fairly easily with 10m being the more difficult band.

At this point I am using the ZeroFive Flagpole as a vertical for FT8.

Nice to have better conditions and lots of contact opportunities.

Took a half-day off of work to lend a helping hand. Fr William KD9TVC earned his General Class ticket a few weeks back and hadn’t had a chance to make an HF contacts.

Earlier designs to get him to the K9ZW Home station on a weekend had not worked out, so when comparing schedules it looked like Friday Feb 11th 2022 was open there was little question that I would play hooky to have the station open.

KD9TVC has been making 2m and 440 MHz contacts since he earned his Technician ticket last November, and had held General Class privileges for about two weeks when we set forth to get him on the air. I gathered that Mike KD9TZ and the gang at SARC (Sheboygan Amateur Radio Club) had added to the Baufong HT I had given Fr William to get him solidly on the air on 2m/440.

At 2100 utc on 20m, I handed over to Fr William an ongoing QSO I had done as a demo, which the two operators exchanged their calls & reports, and made their own. Over the next hour calling CQ more QSOs were rounded up by KD9TVC.

It was SO MUCH fun to facilitate the session. I busied myself on some minor tidy-up tasks, listening and offering suggestions. “Call CQ now,” “Included signal report,” “If you aren’t sure the call, ask them again,” and “now you can broadcast QRZ and listen” were among the many offerings I was able to make.

As clergy Fr William has the presentation and speaking skills, so my suggestions were more about coaching towards an effective pattern for the HF SSB situation.

Prior to getting on the air, we had talked about logging, QSLing, and how the equipment we were going to be using was just a software-enhanced version of a typical transceiver.

For the record Fr William used a Flex-6700 (serial number 11, my original 6700) speaking to a Sure SMB-5B Microphone, outputting to a Flex-PGXL Amp (on bypass for our entire session), a Flex-TGXL tuner, over 1/2 inch hardline to a ZeroFive Flagpole vertical antenna. Keeping it simple he told other stations he was “on a friend’s Flex-6700 barefoot to a vertical.”

We followed the SSB session with a digital demo session where I showed how I run FT8 with a honest presentation as to how that mode was a very shallow experience compared to the SSB QSOs just made. We then ran some PSK31 to show a more keyboard-interactive digital example, and called CQ without response on 20m Hellschreiber as that mode is so historical.

Before the day’s light disappeared, we walked around in the crusty snow to look at antennas and the land. The wind made it a bit of a “bite” when exposed, but stretching one’s legs is always appreciated.

A nice dinner of Spiesebraten, Parched Wild Rice, and Veggies prepared by Alison KC9MPL (XYL) and joined my Victor KC9NWB, rounded out the session. Victor had just finished a lengthy “Full-Stack Bootcamp” which best I can figure out was a hands-on stem-to-stern computer training program complementing his more academic undergraduate computer and GIS degree. We had a great time talking until it was time for Fr William to head home, with a borrowed spare HF Go-Kit of mine.

That making his first first HF contacts was a thrill was both obvious and expressed by Fr William. I think we all cherish some of our earliest QSOs because they were a new event and as such became special.

The personal reward of helping another ham really resonated with me. I had been Elmered on making phone QSOs by George W9EVT and the memories of his “call now,” “say QRZ now” and “don’t forget to give them their report” really made me smile, as I was having a chance to “share-forward” what had been shared with me. Really I became so thrilled to help someone progress that I lost track of time and would say that this rated right up there in ham radio experiences I will appreciate always.

As important as memorializing Fr William KD9TVC’s first HF session is, the real reason I am sharing this is a reminder that helping another ham gain new experiences and progress their experiences & skills is rewarding out of proportion. It is so uplifting and as a reminder seek out your own opportunities to Elmer others on the air whenever you can!

Working FT8 remote to my home station (Flex-6700 to a ZeroFive Flagpole vertical antenna in this instance) I was in fairly quick order make exactly 8 QSOs, one per band, before I switched to working for DX on 17m:

The remote setup lets me run some QSOs when physically not at the home station, by basically adding an internet link from my home station to where I am actually at.

My current series of QSL cards allows me to indicate which physical station I am using and also indicate where I was when I made the contact. 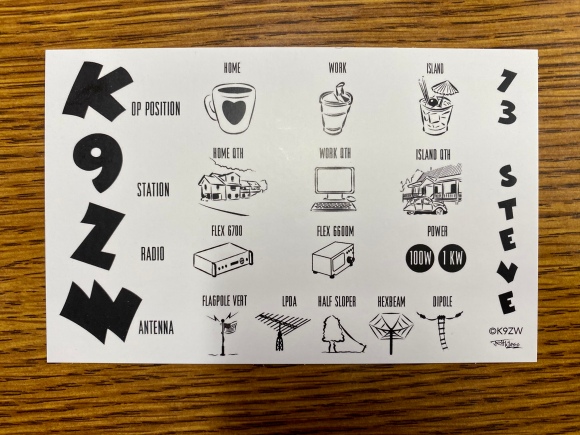 One of the new QSL Card Designs

While I much prefer being in my shack to make SSB QSOs, these remote digital QSOs are miles better than not being on the air at all!

January 2022 is featuring days where it is pretty easy to get eight ham bands during the day on HF.

Several days I did pick up 10m QSOs, making for a few 9-band worked days.

It remains amazing that propagation can vary enough to allow such flexibility over time.

Mentioned in my end of 2021 posts, a special project reduced my on-the-air time and all but eliminated by station building time the last few months of 2021.

So where at the stations at?