K9ZW Northern Station – The Tower and the Antennas

K9ZW Northern Station – The Tower and the Antennas

The Tri-EX/Tashjian TM-370HD Skyneedle is here at a friend’s trailer yard, where we will do some light refurbishment (scrape and paint some light tin parts that are showing surface rust) and fit the Alfa-SPID RAK Rotor, while we wait for the new base and a few added accessories to arrive.

Here are a few pictures of the tower being removed from storage and transported to my friend’s trucking yard: 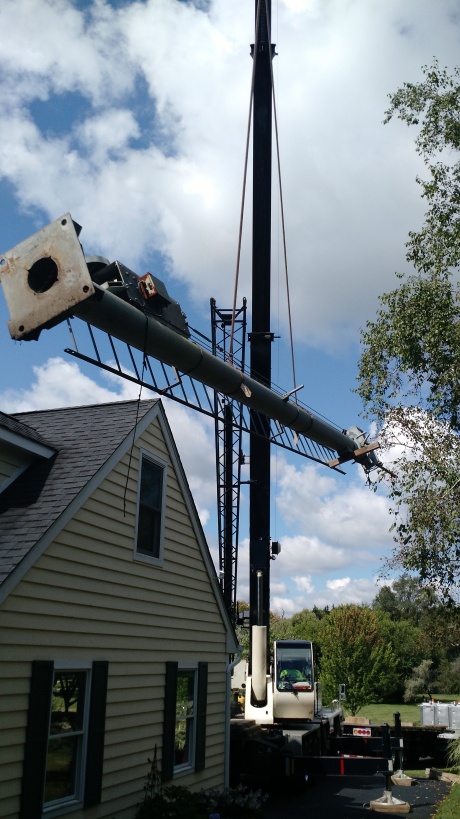 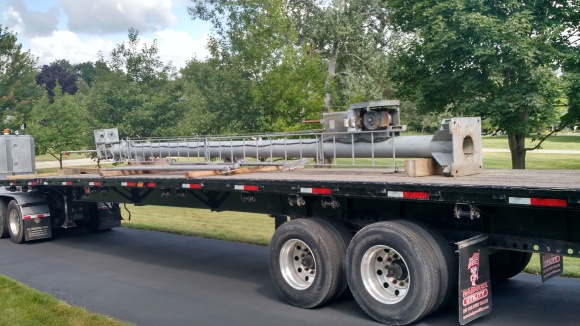 A bit about the TM-370HD – this is a motorized 70 foot tubular tower that has some pretty impressive numbers.

I have a full set of engineering calculations and the wind loading they cite is roughly five times what my array will be, and perhaps 35 times the weight load is available.

Not certain if the numbers they provided are after application of the designer’s safety factor (would presume so, as they were done for code compliance rather than product engineering) so the ultimate wind loading and weight bearing is truly impressive.

Initially going up is a SP7IDX Hexbeam HD Mark II antenna currently in production, and a W9INN Half-Sloper which I had on the ready.

The Hexbeam will cover 6m to 20m and the Half-Sloper will carry onwards 20m to 160m.

I thought I had another Tennadyne T-8 antenna locally sourced, but the present owner decided he didn’t want to sell it even though he’d just advertised it. I’d been interested in having both the LPDA and Hexbeam up to do some A/B comparisons.

Karl and Norman at Tashjian Towers Corporation have been super as usual.

They have in production a new base for me, and I am adding the work platform (tower already has the ladder) which will allow me to do 98% of service work without a lift.

That the work platform will make an awesome birdwatching and other outdoor pursuit platform hasn’t escaped me either! It is quite likely that it will also open up a way for my getting very high speed internet to this QTH, as aDSL isn’t going to quite cut it for remoting a full Flex-6000 based station.

There are a lot of logistics to go – I have verbals from the professional help to get the base in and the tower up, and I have access to a DitchWitch to bury the conduits needed. ( want to run the power separately from the coax feeds and other control wiring.)

I even have some nice touches to add features, like a set of industrial/maritime intercom units so one will be at the tower and the other in the shack.

A Northern Station for K9ZW

Having secured a long term QTH on Washington Island, Wisconsin (US Island WI-001L), I’ve started putting together a station.

Here is what is planned:

I’ll use my usual BuryFlex Coax as supplied by DavisRF with N-Connectors as usual where possible.

The only items to acquire are the Antenna Switch, a Watt/SWR Meter, possibly a station microphone for the Flex-6300 and possibly a Neal Campbell FlexReady PC if I decide not to use the customer server style one I have.

The SkyNeedle, the HexBeam, the Collins Transceiver (with all the extra bits) and a second Palstar AT-Auto tuner were acquired for the new station; everything else came from my back up unit collection. The Expert Amp is coming out of my main shack as I will finally put in the Alpha-9500 that has been sitting in the box for a while.

I have power supplies and lightening arrestors to match my home QTH gear.

Down the road I will most likely add a 4O3A Signature Station Genius SSC-XL and replace the Flex-6300 with another Flex-6700 GPSDO/ATU transceiver to make the Northern QTH and Home QTH closer in design.

Eventually I would hope to share SmartSDR Radio “Slices” between the two QTH’s, with a long term goal of being able to remote one or both stations.

Now to get the Island QTH on the air while everything is put together, my SteppIR CrankIR Antenna with Flex-6300 setup, as used at Rocky Ridge Farm last year, will be pressed into action.