The Art of QSLing – New Tab

Have created a new tab on the menu above – “The Art of QSLing” which offers links to articles on the QSL process.

Later additions will include some direct on-line QSL resources.

My outline points for the presentation on QSLing are:

•When should you QSL?
•What should be on your QSL card?
•What to do when cards you receive have problems?
•How to ask for aQSL Card?
•How to actually GET that Card?
•Ways to send your QSL cards out.
•The Electronic QSL – eQSL & LoTW options.
•The Famous “Plum Method” of Foreign Stamped SASEs.
•Bureau services like GlobalQSL.
•What are those SWL Cards and do you answer them?
•The use of “Green Stamps,” IRC (International Reply Coupons) and Donations.
•Special Twists, Like the Special Currency System.
•QSLing with DXpeditions.
•What is a Bureau and how do I use them?
•What does all this Cost?
•When to trade Money for Time, or Time for Money, in QSLing?
•Resources for the QSLing Radio Amateur.

I’ll be leading the presentation and discussion, hopefully with one or more of the guests I’ve invited.

Should be fun and if the handouts are well received I’ll see about getting them put up on the club blog and perhaps here.

Getting my QSLing Up to Date!

Making an effort here to get my QSLing up to date.  Unsing Global QSL http://www.globalqsl.com/ the vast majority of my DX QSLs should be caught up.  From the No Manager/No GlobalQSL/No Bureau courtesy information from GlobalQSL of the last roughly 1100 cards about 7 or 8 will have to be done here manually as directs.

While this takes care of my DX catch up, I am at least 400 cards behind on domestic QSLs.  I had been pretty good until until I bluntly just got a bit bored with the paperwork side of QSLing and let that side slip.

I do eQSLs as well http://www.eqsl.cc/ automatically as as much of a back-up log as anything, and about once every couple years I put up with the silly technical hurdles of LoTW and upload my logs there.

I’ll have to see about setting up a label printer and doing the domestic QSLs in arrears, so I can get back to even up. 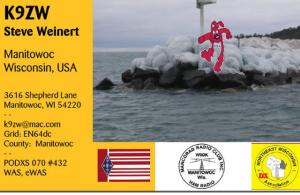 My domestic cards are not all similar, as I often use a Lake Michigan Theme card I had printed up.

Simple Thoughts on a Complex Mess – LoTW, Run or Drop?

Tonight I received an ARRL email that my K9ZW LoTW (Logbook of the World) certificate is expiring in three weeks, and if I just followed some simple instructions it would all be easy.

Rubbish – twenty minutes later I’m still in the midst of dealing with the quirks of LoTW arcane .tq6 and .p12 file mysteries and the issues of upgrading my computer hardware several times during the three years this certificate existed.

I can renew a credit card in moments online, or I can file in all sorts of truly mission-critical online government data (like with the FAA & FCC licensing branches) in moments – BUT to do deal with LoTW is long winded, convoluted, sensitive to hardware (wonder what would happen if I was running a VM sandbox – say Parallels or BootCamp – and then tried to run the Windows version of LoTW in that ethereal environment?).

I’m going to revisit LoTW in a couple days – perhaps the Certificate Gremlins will let my software work and I might be a better mood – but I am thinking it is time for this Life ARRL Member to make a LoTW statement and just pack in a LoTW.

Computer time is measured in not only “clock time” but in “cost/benefit time.” The first is our usual measure of passage of time, and the second a revisit of that time weighted in what benefit/pleasure we get for our time investment balanced against the costs to do the activity (dollars, technical costs and the time used itself).

LoTW is a failure for me in “cost/benefit time.” It simple is to fussy and a time-eater with so little payback for my personal participation in the hobby.

Maybe my experience is untypical – given that I use several computers on several platforms and update them very regularly – but when doing on-line banking is easy compared to a QSL logging system, that QSL logging system is too flawed to waste time upon.

More in a couple days.

Logging is a huge area of personal preference.

Here is what I am doing:

Home Station – typical ragchew/DX: Direct into MixW (which acts as my “master log file”) – all contacts also logged to eQSL as a backup, and LoTW when I get around to it.

Home Station – Contest: Direct into MixW which I set into Contest Mode (which acts as my “master log file”), then I also keep my own Log onto Paper Log Sheets – all contacts also logged to eQSL as a backup as a BATCH after the contest, and LoTW when I get around to it.

At Guest Stations – typical ragchew/DX: Log onto Paper Log Sheets, which I enter afterwards into jLog (A Java logger) to produce an adif file to import later into MixW I will do the jLog prep daily if I have a chance, sometimes it waits until my return home.

At Guest Stations – Contesting: Log into whatever the host uses on computer and then I also keep my own Log onto Paper Log Sheets, which I enter afterwards into jLog (A Java logger) to produce an adif file to import later into MixW. I will do the jLog prep daily if I have a chance, sometimes it waits until my return home.

Mobile/Portable: Log onto Paper Log Sheets, which I enter afterwards into jLog (A Java logger) to produce an adif file to import later into MixW. I will do the jLog prep daily if I have a chance, sometimes it waits until my return home.

I expect I make it more complicated than it really needs to be.

What is a QSO & QSL with Your Station Worth Today?

Received a very unusual letter about a GlobalQSL QSL Card that somehow had made it through the domestic QSL Bureau to a fellow ham.

Unfamiliar with the look of a GlobalQSL he thought it somehow was a fake.

Looks like I must have made a logging error with for this QSO, but unless I spend ages looking through thousands of QSOs in my various logs I’ll never know. The fellow forgot to include a single hint as to the date.

He’s kindly offered to set a Sked for a “real QSO” if his gear holds up.

At first I was very put off by the letter. Then I wondered if it was “real” or a “send up?”

Then I realized my fellow hobbyist puts a whole lot of value on a QSO and a QSL. Sort of a bit of chivalry from a time when QSOs & QSLs stood out in one’s life. Surrounded by less noise, they mattered.

I’m not likely to take the fellow up, as I think I have every county in his state on Voice already, and I’d feel bad if his gear was smoked trying to make a QSO my way.  I will drop him a note in a  couple weeks after I read your comments and ponder a bit more.

His letter does beg the question though, “What is a QSO & QSL with Your Station Worth Today?”

Is it as much as it appears to be for this chap?

Or are you much more casual about it, as I am?