Field Day 2012 was a quick, quiet and quite effective event.

With the W9DK Mancorad Radio Club in a local park.

The spot we had scouted out, AND its backup were both full of people. Unexpected, but hey – isn’t that what Field Day is supposed to be about?

We found a new spot that worked out just fine.

I had brought my Go-Kit primary antenna setup – a Hamstick Dipole which I have very carefully tuned using a Timewave AmtennaSmith TZ-900 to balance between the sides of the dipole. 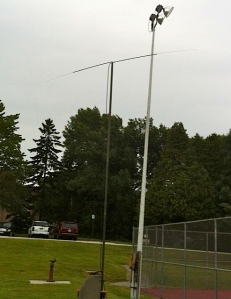 Getting the antenna in the air is some of my supply of US Army surplus camouflage support poles – usually I use five to seven poles for an effective height of 15 to 21 feet. (Not the lamp post is much further away than it shows in the photograph).

I use a Black & Decker Workmate portable workbench as the antenna mast base, using clamps to lock everything together. When i operate alone I set up directly on the bend, and put my heavy aircraft batteries on the lower shelf to add stability. For Field Day we set up on a park picnic bench 40 feet away.

An extra clamp on one of the mast sections works ok as a rotor of sort. This “Armstrong Rotor” is not precision, but we are swinging a dipole, not a beam.

I did bring a new to me used TenTec Jupiter setup, though never got it out as we used one o fthe club radios – a Kenwood TS-440 that does an excellent job.

Interesting experiment was the huge drop in noise level when we added basic station grounding.

All in all a good time, simple style of operation (we even paper logged our QSOs) and relaxing until I was called away to rescue a family member who was broken down on the Interstate south of town.

A great day in the Park!

Planning for a minimalistic Field Day 2012 with Mancorad W9DK Club.

Sharply focused to what matters, we will operate from Lincoln Park using an HF station, some satellite gear and bringing another QRP rig.

“Bring Your Own Lunch” BYOL makes logistics much easier.

Operating hours have been set for Noon local to 4 PM, with “run-on” if members want.  The park doesn’t allow overnights without special arrangements and we know the mosquitos will be very bad towards dusk, so common sense prevailed.

Using a mix of member and club gear, much to whittle down the amount of gear moved and to limit set-up/tear-down time.  We’ve giving ourselves 45 minutes each side, but know we’ve done this setup in 15 minutes when pushed.

No rain plans, so if the weather sucks we’ll be doing something else.  Some members talked about operating from the Club Station provided it isn’t lightning in any bad weather.

Catch you on the air Saturday!

My outline points for the presentation on QSLing are:

•When should you QSL?
•What should be on your QSL card?
•What to do when cards you receive have problems?
•How to ask for aQSL Card?
•How to actually GET that Card?
•Ways to send your QSL cards out.
•The Electronic QSL – eQSL & LoTW options.
•The Famous “Plum Method” of Foreign Stamped SASEs.
•Bureau services like GlobalQSL.
•What are those SWL Cards and do you answer them?
•The use of “Green Stamps,” IRC (International Reply Coupons) and Donations.
•Special Twists, Like the Special Currency System.
•QSLing with DXpeditions.
•What is a Bureau and how do I use them?
•What does all this Cost?
•When to trade Money for Time, or Time for Money, in QSLing?
•Resources for the QSLing Radio Amateur.

I’ll be leading the presentation and discussion, hopefully with one or more of the guests I’ve invited.

Should be fun and if the handouts are well received I’ll see about getting them put up on the club blog and perhaps here.

This post is a combination of two the appeared at our club blog featuring Jeremy KC9BWK’s ultra-Steampunk 80/20 Scratch-Built Transceiver and some of his first QSOs! In the last picture the operating rig is ALL the parts in Yellow Lines!!

Jeremy KC9BWK used several references and worked out his own design, with each module built up as a separate entity.

Some examples – like the 5 kHz oscillator module in the candy tin feature cut-trace circuit boards.

Others like the mixer module standing on edge in the center featured boards he etched himself.

Where appropriate or where revisions required it “dead bug” and mixed building techniques are used. These are amplifier modules built around parts taken from old computer supplies. The smaller outputs roughly 20 watts and the larger design 120 watts on 80m.

Much of the transmitter portion is built inside a shielding framework, again with a mix of cut-trace and dead-bug design.

Most of us never think how there are a series of functional modules in our radio. This is Jeremy KC9BWK’s transceiver with frequency counter & display, filters and most components.

Much of the inspiration for his design is based on an excellent web-book “Crystal Sets to Sideband” by Frank Harris, KØIYE, the latest version (#12) which is available as a PDF or for online reading at http://www.wa0itp.com/crystalsetsssb.html and also in a printed copy (it is 436 pages to print out) at http://www.lulu.com/product/hardcover/crystal-sets-to-sideband—a-guide-to-building-an-amateur-radio-station/16249809 (I intend to order one at one of Lulu’s periodic sales).

Jeremy had to report that the current ARRL books were not very useful for this sort of work, though he did adapt one module’s design from an old ARRL Handbook. Compared to the Frank Harris K0IYE book he couldn’t recommend any of the main ARRL books.

Here is another view of the exciter portion of the transmitter.

Many of the controls have been remoted to allow eventual placement in a case.

The frequency counter uses a PIC chip, which Jeremy has offered to program member’s PICs if they want t build their own.

The modules mostly use coax with RCA plugs to interconnect.

Many parts are salvaged from old gear, with a handful of purpose bought components. Jeremy described how he mostly winds his own air-coil toroids rather than trying to wind on ferrite cores.

Many of the components are surface mount items!!

In general he does not drill his boards, preferring to solder leads to the face of the traces.

Here is a final shot of Jeremy KC9BWK showing off his handy work!

Well done Jeremy KC9BWK and thank you for sharing your inspirational project!

Update on Jeremy’s Radio – even some DX in the first contacts logged!

I just wanted to share the news — I made a couple contacts today on 20m!

#1 was KA3UNQ/P at the Drum Pt. lighthouse in MD, #2 was KB1KTF in West Hartford Ct.. I talked a little longer with KB1KTF, and he gave me a good report on audio and signal, so I was very happy! I got the final output up to 5 – 10 watts with a 12v supply and I was going to try 24v next to see if I could get the power up a bit more, but things seem to be working ok so far.

I am just relieved to finally make some contacts so that I can say that the transceiver DOES work! Until now I just thought it was probably working. Getting power output on 20m has been much more difficult than 80m; I made a few changes today that brought the output up a bit more, so I thought I would give it a try and to my amazement it worked.

After trying to make contact for quite a while on 80m it was a huge surprise to hear someone come back to me. I made another contact this evening — VEA6POP in Calgary and he gave me a 5/7 report. It must be a world of difference from the 80m band where I was fairly certain I was putting out more than 5x power than I am on 20m. Now I have to design a QSL card to send out.

To let me keep “With Varying Frequency” on focus as a personal amateur radio blog, my local club Mancorad has a new Blog format announcement page at:

Like they say “Now back to our regularly scheduled programing” here.

Ric N9XFD has operated from scores of untypical sites quickly setting up, scoring a few QSOs and moving out before anyone really knows he was really even there!