Building a Portable Digital HF station for use in various activations I have planned for summer/fall 2021. Hope to have the DRAWS/RADIO set up and running before this summer.  I am NOT going to drag a FlexRadio Flex-6000 to some of the places I hope to operate from.

On the digital side I am using a Raspberry Pi (4B) with a specialized add-on bit of hardware, the North West Digital Radio DRAWS that will add a GPS/on-board clock and the necessary interfaces.

Initial intention is to us a SGC-2020 transceiver, but I may drag a TenTec Jupiter to my activations instead.  I will use a keyboard and mouse to control the actual digital software for the activations, WSJT or perhaps fldigi.

The DRAWS is a neat bit of kit that should streamline my station and reduce the component count. That said it is as best semi-documented and a bit of a work in process intended for those willing to roll their sleeves up to get it configured, wired and going. Not very plug-n-play at all.

A bit about the DRAWS lifted from the NWDR website:

END_OF_DOCUMENT_TOKEN_TO_BE_REPLACED

This is a great story from over at the Silicon Graybeard blog:  https://thesilicongraybeard.blogspot.com/2021/03/a-couple-of-things-i-couldnt-resist.html

[A] Scott Manley story I came across during the week. When SpaceX launches a Falcon 9 mission, they recover the booster about 9 minutes into the mission. The upper stage that actually deploys the satellites is left in a higher orbit and is currently not considered recoverable. I believe they are put into a destructive de-orbit, using some onboard thrusters or perhaps some residual fuel, so that they reenter the atmosphere and are destroyed. During the couple of days this takes to have its affect, the second stage is still operating on battery power and transmitting telemetry, including video.

It seems a group of hams in Europe figured out how receive the Telemetry and decode the video.

Scott does an OK job of describing what the hams did. The “gizmo” he mentions at around 3:28 or 3:29 is called a downconverter. Fundamental, essential technology, and if you have a typical house, you’re probably surrounded by half a dozen of them. In my talk about superheterodyne receivers, every block diagram starts out with a downconverter.

All that aside, it’s a fun story. It comes down to SpaceX using open standards for their telemetry and a bunch of hams willing to try lots of stuff.

The data collection from telemetry is pretty awesome!

Sounds like a project for hams line-of-sight from the trajectory.

Once I’d replaced the boot SD Card with a very inexpensive SSD drive and SATA to USB adapter, my WordPress Raspberry Pi is “in production.”  I repurposed a Raspberry Pi 4B for the project.

As it is running headless (no direct attached display, keyboard or mouse) as a sort of ultra minimalistic server, it would have been wasteful to have used the Raspberry Pi 400 all-but-monitor-in-one Pi I originally purchased for the project. 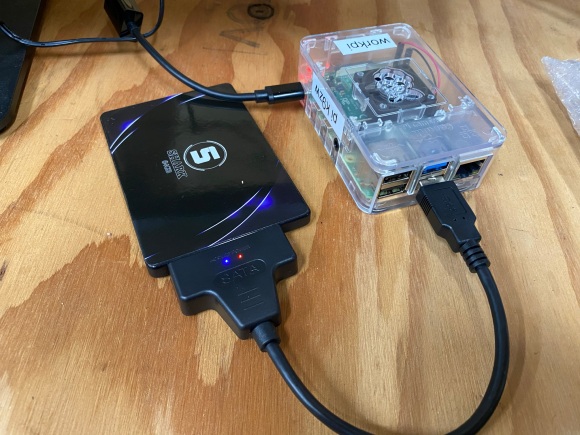 Raspberry Pi 4 with the external SSD and adapter

The WordPress is available to all the home network as a local resource and renders quite well despite minimal resources.  Here is what the early theme looked like from a couple random devices.

WordPress instance as opened from another Raspberry Pi

END_OF_DOCUMENT_TOKEN_TO_BE_REPLACED

Per FCC rule FlexRadio cannot take orders prior to FCC approval but they are collecting a list of interested parties.

To quote the FRS community:  Mack (W4AX) did an excellent job explaining the certification and shipment issues on his latest post on the Flex Forum:

I am running a very small Beta test to make sure they are rock solid.

I expect that to take three weeks. By then we will have the full FCC and CE certifications.

The first shipments will go to people who purchased a PGXL during the promotional period that included a free tuner.

We expect to clear that backlog not later than the end of June.

At that point shipments will begin to people who are on the wait list.

Firm orders will be taken as soon as we have the FCC and CE certifications.

TGXLs are being manufactured as quickly as possible.

There is a huge demand.

Nothing heard in years on the Alpha 4040 or the Kessler autotuners. I’m hoping to seem my PGXLs by summertime.

How much money are you willing to pay to receive Ham Radio promotions?

The recent QSO Today virtual event was premised on the idea that a ham will give up their time and will pay their money to receive immediate access to special deals and the latest information.

There is a certain part of this value proposition that is valid. A run to Dayton costs you time and money for sure.

But like so many of us, I personally wasn’t willing to give up a weekend to watch ham radio stuff while discounting the reality going on around me.

When you go to Dayton the displacement from you usual nurtures participating in the event.

When you are at home your real life doesn’t retreat. Usually you know the consequences of ignoring the reality around you – wife gets mad, dishes pile up, the dog howls to be let back in, the snow needs shoveling, and somehow those vendors & restaurants that feed you a a hamfest didn’t show up for you virtual event.

Nobody buys you a beer, whispers check out the Brand-X booth’s prototypes or will haggle with you when you want to new code keys so you can gift one to a friend.

The virtual event offers fractional experience while still expecting a heavy time demand and as of this year an entrance fee.

Perhaps I have arrived at a point of life where a bit of quiet, solitude and focus are appreciated. If I buy a Sunday newspaper I throw out the huge wad of ads because I value my time more than any discount on frozen chicken tenders at some grocery store I never go to anyway would save me.

Remember the choice to give up a weekend and spend the money is irreversible, where the choice to sit it out until later is not an absolute, as I can reverse much by either buying a late ticket to watch the materials during the embargo month, asking the manufacturers/presenters directly for it, or participating vicariously through others reporting on the event. While I cannot retrieve the immediacy of attending at the moment, everything else is reversible.

Personally again I favor the reversible over the irreversible whenever there is a bias in decision making of a risk of significant lost time.

Harvesting the materials later also lets the quality filter of attendee’s responses vet what I spend time on later.

And I don’t have to sit around while the presentation team’s techies try to fix the technical flaws.

Again paying the ten bucks is only annoying (unless they agree to not sell my information to advertisers, the payment will result in spam emails) but the gamble that my time would or wouldn’t be well spent is the real issue.

Following on to my post (make sure you read the comments if you want to do a project like this) at: https://k9zw.wordpress.com/2021/03/05/a-shack-resource-dissident-pi-project/

The storage I/O improvement is stunning.

The running configuration is WorkPi with Dogfish SSD vs the supplied Patriot SD card or in the second graph a Thinkpad we had at hand.

The Raspberry Pi 400 that just arrived was also tested. 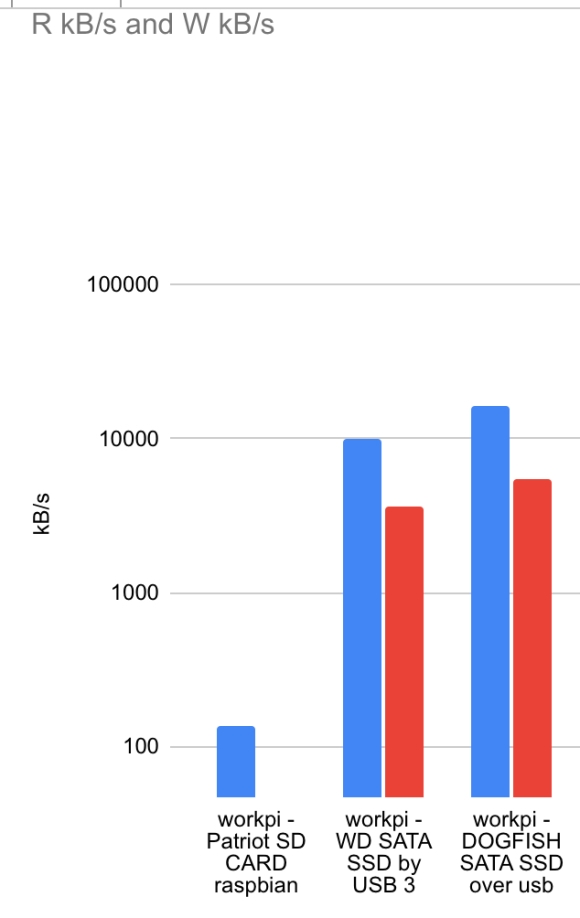