The Island Rack basically has been put together piecemeal, and now that it is settling into an all-FlexRadio setup it was time to tidy things up.

Here is the backside of the rack:

Kind of a “So What?!” picture as I forgot to capture before tidy-up shots.

END_OF_DOCUMENT_TOKEN_TO_BE_REPLACED

Spent some workshop time on the last Saturday in January 2021 getting the main K9ZW Home QTH FlexRadio Rack up and running.

The FlexRadio setup had been usable barefoot but  operated from other power supplies, routers and gear not actually on the rack itself.  I refused to take a picture of the rats-nest of layered cabling that had been in use. 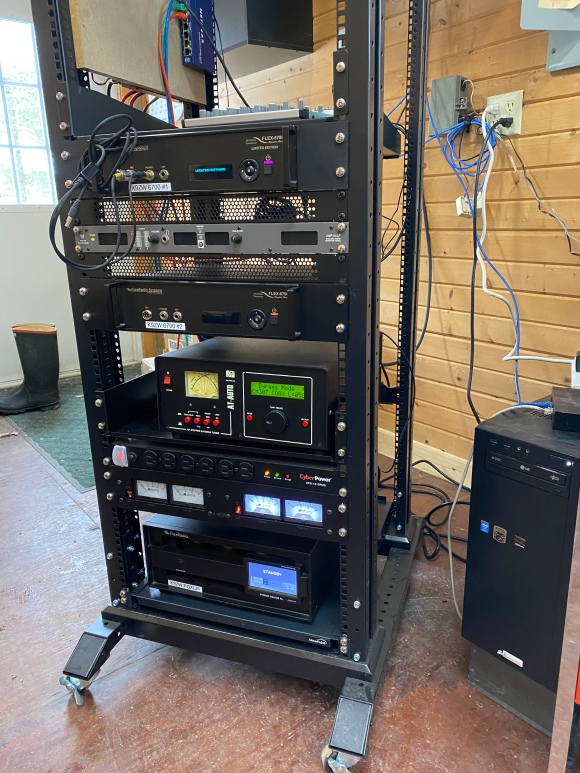 I’d been putting off wiring everything to essentially make everything work. So today I got out my Andersen PowerPole tools, made cables, did software updates and got the whole lot working right. Walking you from the top down:

END_OF_DOCUMENT_TOKEN_TO_BE_REPLACED

My backup Flex-6700 took a trip to Austin TX as it’s OLED had failed, and I wanted to have it get a full checkout.

As it was a non-urgent service need, it didn’t warrant priority handling, and once we determined it needed to come in for repairs I waited for a RMA to be issued.

FRS is managing their RMAs to keep things flowing, but to avoid having radios show up too far before their quarantine period.

END_OF_DOCUMENT_TOKEN_TO_BE_REPLACED

FRS delivers and then some!

More than just revised and improved!

It is as if a whole brand new radio was dropped off.

The screen shot, by the way, is the radio being run via wireless from an iMac using Win7/74 under Parallels.  The base machine is running OS-X Mavericks.

I could have opened another Slice, except I had “wasted one” fiddling from my WinXP box and iPad Air (Air running K6TU’s App) and didn’t feel like rebooting to clean up my mistake.

FlexRadio Systems has released a very encouraging video on the use of the new DAX software to interface for digital modes.

As I write it is October 2013 and the radio is now on full production release SmartSDR 1.0.0, the Preview program having wrapped up after four-five updates, each which transformed my Flex-6700.

Most importantly SmartSDR 1.0 is the first step on a road map of quarterly updates, each which will bring major additional features to my Flex-6700. By download I’ve got a “New Radio” arriving every three months!!

Flex has implemented an excellent collaboration tool during the Preview Edition program that is staying in use. http://community.flexradio.com/flexradio Combined with their main website’s HelpDesk, ZenDeck (warranty system), KnowledgeBase and Downloads the support is excellent. Their main website is at: http://www.flex-radio.com

It was an absolute privilege to participate and when the technical discussions were outside of my knowledge zone, to be an insider spectator during the forging of the earliest widespread release of SmartSDR into a form that could stand as production. At times I was a bit embarrassed when fellow participants forgot that the Preview Edition software was a work-in-progress. Those who had the big picture view were amazing in the amount of testing, troubleshooting and “what if” challenging they gave a radio-in-progress. I personally learned a lot about our hobby by being part of the process.

Each 2 weeks, provided candidate software passed small group quality checks, an update of “SmartSDR Preview Edition” rolled out. In a few cases the candidate software did not pass FlexRadio Systems small group quality checks and therefore was not released to the Preview Edition group. Some very silly grumbling from some of the Preview Group who moaned they didn’t get an update – as if FlexRadio Systems would ever knowingly distribute software that failed quality checks? In all honesty there were members of the Preview Group who should have not asked to have their radio shipped until the features they felt critical were completed.

A few of the Preview Group struggled with “The Radio is in The Software” capability of the next SmartSDR Preview Edition to transform their radio to the next level. It is worth remembering to check either the SmartSDR software level being reviewed or the date any SmartSDR commentary you read on the internet given the massive improvement achieved in the SmartSDR Preview process and planned with the roadmap taking SmartSDR v 1.0 forward.

DDUTIL hooks SmartSDR CAT and SmartSDR into an environment your other radio software and hardware will recognize. In my shack DDUTIL integrates an Expert Amp, Palstar Autotuner, a Green Heron rotor control, and several software packages to my Flex-6700.

Okay, here is where the rubber hits the road – with the first public release of the SmartSDR software my Flex-6700 is already equal to or better than any other amateur transceiver on the market. At least any that I have had the pleasure of spend time operating. There is a remarkably easy-to-listen-to nature of the received audio and it is a true DX hound.

The receiver is a very good match to the Tennadyne T-8 Log Periodic antenna, making the most of the no-tune nature of the Log.

I’ve been able to leave the Expert Amp on half or lower power with the same effectiveness.

All in all it is a ready to rock-n-roll SSB DX rig. Similar reports speak of sound CW performance. Laggard at this time is the Digital Mode capabilities which are sound provided an external interface and computer sound card audio routing like a black-box transceiver is used, as the full digital implementation is further down the road map. Reports are solid on those using a Flex-6000 for digital in the old school setup.

The ability to pop open panadapters on additional bands and drop receivers to monitor other band segments/bands, is awesome. The features presently released work quite well, with only a few glitches being reported at this stage.

Now what is cool is about every 90 days a new updated version of SmartSDR will be out.

Here is a pdf snapshot of the present (Mid-Oct 2013) roadmap, showing that several features have already been pulled ahead:

The Flex-6700 Future Beyond the Road Map:

Obviously the road map is just a scratch at the surface of unleashing the Flex-6000. SmartSDR is just one of several possible GUIs and non-GUI interfaces. FlexRadio Systems has hinted about add-in modules to Contest, work on other client platforms, link/combine several Flex-6000s, do wide-area diversity and things as users we’ve not likely even thought of.

One has to remember that FlexRadio Systems is building on years of experience with professional grade products, and is distilling down the best of that experience to an amateur radio products.

You can see my pre-launch series of articles for some of the possibilities I had thought up.

The Flex-6000 Series is very different than a conventional transceiver. In its present form the Flex-6000 is not:

Like any new technology the Flex-6000 and SmartSDR have attracted naysayers – the vast majority who have an agenda rather than first hand observations to share. Again it is important to date reviews/comments against the SmartSDR Preview Edition version or production roadmap version, as the comments may be of historical interest only given the rapid evolution of the radio.

The Flex-6000 is seriously challenging to conceptualize as the hardware/software combination is layered, complex, exceptionally simple at the User Interface while immensely powerful under the hood, elegant, evolving, and vacates concepts like VFO-A/VFO-B architecture.

This is not a comfortable mindset for some users, as their personal concepts of what an amateur radio should be is something different than this brave new world of the Flex-6000. A few SmartSDR Preview Edition participants sold their radios to other hams, or simply put them on the shelf waiting until a general release with the feature they hold dear is available.

The latest generation of technology always stretches the operator. The “Game Changer” of the Flex-6000 series is here, to stay. That doesn’t mean that IC-7800’s, or FT-1000MPs, or TR7s, or Gold Dust Twins – or any other layer of prior technology – is somehow anything less. I have no intention of suddenly selling my favorite older radios because of the Flex-6000 revolution. But I do understand that the new cutting edge has been pushed way ahead – the boundaries of the hobby have suddenly expanded. And I am thrilled to be a participant with radio #11 of the new wave of Flex-6000 technology.

What could be any more fun?!