Have been trying since the Dayton Hamvention 2012 to catch a Hilberling PT-8000 user on the air for a QSO. Would love to hear what the radio sounds like.

The announcement that the radio would be available in the USA had appeal to me, but I was surprised that another large price jump was included and the timing was bad if you owed taxes. Caught me with my “radio sock” nowhere near full enough for a PT-8000, and what I had saved for hobby already committed for another radio.

Rumble was that there was at more than one of the three or four available PT-8000s at Dayton sold – heard that Ted W1HFD acquired the first.

Haven’t heard from WV4Y since the few emails when he learned he would have radios to sell, so hoping he found a home for each of the ones he had.

Maybe in a year or so when I get all our family’s young hams through University I can put a PT-8000 in my shack.

The Announcement (as a pdf): PhotoLetterHilberling.pdf

Marcus WV4Y of Hilberling USA will have USA Models at Dayton 2012. He expects to have a number of units there, unless they are sold upfront before Dayton. Price is just shy of the $20K point, with the Euro-Dollar exchange rate playing an unfavorable role in pushing the price into the professional communications gear area.

Unlikely I will personally buy one this season, as my warchest for new radio things needs to grow a decimal place to higher side. Now if I could figure a way to make a PT-8000 a tax deduction…..

Certainly could see one down the road, perhaps as part of moving my operating desk into the main part of of our house, rather than tucked away at one end of the intended wine cellar.

Have heard that the long awaited Hilberling Transceiver in its revised/updated version at a USA based lab undergoing FCC compliance testing.

With the radio in production, perhaps late this year or early in 2012 we’ll see the first ones in ham shacks this side of the pond.

Hilberling has announced the start of production of the PT-8000 and launched an updated brochure.  First customer deliveries of the production model were made.

Marcus WV4Y is on my call list – want to know if he has one in Green Bay Packer colors coming (Bronze Green in Hilberling nomenclature) which just might be excuse a fellow would need….

Just in from the Collins Collectors Association Banquet. http://collinsradio.org/ A great bunch of people, though they were very much let down by the hotel – cold, late food, an electric country/folk group performing through a folding wall almost masking the speakers, and a complete lack of the little touches like Hotel Signage to point people to the right place for the event. A very in depth look at the last Collins model – KWM/HF-380 was perhaps too sharply focused for those of us who do not own this particular model, though there was no question the speaker was an absolute expert on the radio. I did win a $50 dsicount coupon on Boat Anchor repair at Land Air Communications ( http://www.landaircom.com )

More on the Hilberling PT-8000-2010 I looked at earlier in the day ( http://hilberling.com/en/en_son/index_en.htm ) – the new version is expected to ship to the first North American clients after Labor Day. Due to the extensive upgrades to the design between the original PT-8000 and the PT-8000-2010 Hilberling is having it again reviewed for FCC compliance. Production rates are likely to be steady with roughly one fo three radios built destine for North America. Base price is $19,900 for the 200 watt setup. In the colors available there is a lovely Green with Yellow Accent perfect for a shack with a QTH in Green Bay Packer’s country! Somehow I feel set up…..

The other radio that really caught my eye – that looked FUN – is the Elecraft KX3. There are websites resounding with photos take at the Hamvention of the KX3, and my impression holding the display unit in my hand is a solidly enthusiastic. If it plays on the air like it looks, then it is another Elecraft winner! Their website is supposed to be updated in the next weeks to feature the new radio – http://www.elecraft.com/

Interesting observations on the new Ham Books – they are mainly compilations, weak kneed watered-downs of true How-To books (lawyered down to meet risk reduction goals?), hard copies of stuff you can find on the net, or reprints. One long time book seller bought zero new stock to the show and is selling out of what books he has due to the changing offering and the changing readership. I’ll write more on this after pondering a while.

As a facility there seems to have been some effort made at the Hara to clean up the worst, but it still sucks. I left the HF Antenna Seminar in Room #1 at half way to escape the failed air-conditioning which left the room stifling beyond reasonableness. Actually it was just the front half that was heated like a level of Dante’s Inferno, as the A/C was on in the back, but that was so far away you couldn’t possibly see the slides.

Heard a lot about regional Ham Meets – Ham-Com in TX was being much discussed. Perhaps people are giving up on the underwhelming side of Dayton?

Between the costs of travel, the ability of the internet to convey information, that an evolution is obvious. Interesting times! 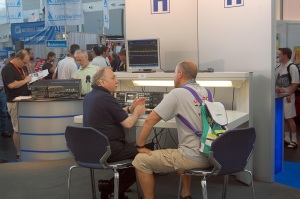 Sales, at least for much of the world, of the very interesting and hansom PT-8000 have started. At the Hilberling website there are currently a lot of very nice pictures of the German Show http://www.hilberling.com/news/news.htm

Not certain if the PT-8000 is the FCC approved version and if it is being offered for USA Sales.