[EDIT/UPDATE – The BBS has been majorly reworked by cr1mson and his team at KANSIT BBS Consulting.

Doing a soft launch of my K9ZW SPOT BBS project.  So if you read my blog you get a chance to see the BBS as it develops.

SPOT was the name of my old FidoNet OPUS system some 30+ years ago.

SPOT was actually S.P.O.T. for Someone Playing On Transistors, which seems are good as anything else way back when.
First version login: 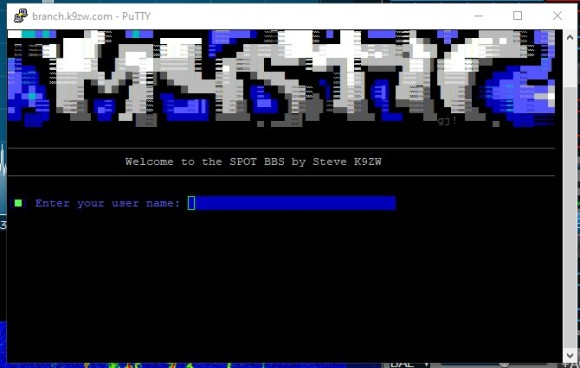 [Both] Telnet [and ssh] connection[s are] active at this stage, and the message groups are fsxNet, WhisperNet, and more. If you create a new user for yourself I have to manually upgrade your access level the next time I am on the BBS.

[You can use “NEW” for usernames/password to get you started.]

Remember spotbbs.k9zw.com is (presently) NOT an internet URL, rather it is the same sort of shorthand we use on the internet to let you remember the BBS’s address. If you enter spotbbs.k9zw.com into a browser it does not resolve. That might change down the road.
END_OF_DOCUMENT_TOKEN_TO_BE_REPLACED

Ham Radio as a Person Heads Toward Retirement

A while back (18JAN20) Jeff KE9V wrote a piece on “Hobby Money” which he has since purged while updating his website.  My original workup for this post had included referencing my comments to Jeff KE9V’s now deleted post.

Often in discussion concerning Ham Radio touches on the ROI (Return on Investment) a ham achieves for the money they spend on their hobby.

But is that really the right measure?

On a pure ROI basis most hobbies come up short.

Why would you buy a $75,000 fancy piano, spend endless hours in instruction and practice, to play music that you can stream for free?

Or that $75,000 fishing boat when you can buy fish cheaply at the supermarket?

Or that expensive land & cabin in the woods to harvest modest amounts of game, when you can buy meat ready to cook for a fraction of the price?

Similarly Ham Radio in most forms comes up short.  I do know one local ham who designed and built his own transceiver from 100% salvaged components so his out of pocket cash investment was trivial – perhaps in sub $50 range with his scrounging.  While out of pocket he is treading very light, but he never confesses how many hours of his time went into the project.  I’m kind of thinking at minimum wage enough labor that in dollar equivalent would have bought a contest grade top end transceiver was invested.  But he had a lot of enjoyment, learning and pride as additional paybacks.

In the original article some thoughts on a ham as they head towards retirement were laid out.  Some pretty good thoughts centering on what the value of ham radio could be once a person retires.

Over the past few years I have seen people face the issues that they have retired and started the life-style changes that employment, health and other changes brought with hobbies that couldn’t flex to their changing circumstances.

Some folk are lucky and ski until they are ninety, have enough investments that they can take monthly retirement cruises until they are very elderly, and have the vision & muscle control to competitively wing shoot throughout their retirement.

Others, not so much as they face the brittle bones, weak eyesight, duff hearing, balance problems, wore out knees/joints and other aging infirmaries that are not worth scaring ourselves cataloging.

Some find out that their retirement preparations fall economically short, or that other economic issues like health care not covered by insurance or needs of other family diverts their “jolly monies.”

Those who do have life changing issues may face giving up some of their old activities for sound reasons, and then need to find something to engage themselves.

Some have interests that can make enough transitions to match their changing needs in retirement.

The young and spry can do summits on the air, be the muscle to do field day club activities, do Emergency Radio activations, contest, do DXpeditions and basically run as had as they want.

Typically hams move in the direction of building a more mature station as their lives change, with a bit lass of the other stuff.  They often join those who build radio kits at some point.

Truly modern ham radio can move with the ham to a retirement place, to potentially assisted living and right through their life changes as long as they remain able.

Not all that many hobbies that can do that!

Ham Radio, the old school BBS, Echomail and How the Past can be part of the Future

Ham Radio, the old school BBS, Echomail and How the Past can be part of the Future

I am going to guess that if you are less than a certain age in terms of how long you have been on the internet, that you may be the most comfortable with using a browser to access remote content?

Perhaps you haven’t heard the squeal of a modem navigating a connection https://youtu.be/ckc6XSSh52w?t=36 – – back in the day mine was USRobotic Courier HST v34 (https://infogalactic.com/info/USRobotics)

Then a series of house moves, an expanding family and my own planes filled up my time. I had also had my fill of BBS trolls who basically polluted the BBS every time the snuck on, thinking it funny to be juvenile uploading nasty pictures and pirate software, or calling everyone bad names in every forum they found a way to access. With the way officialdom was cracking down by holding system operators (Sysops) responsible, I wasn’t having it. So “SPOT BBS” (Node lists said “Spot, Up the Road” but the board itself said SPOT BBS) was shut down.

One of the worst trolls has since passed on, a couple years back. I was surprised to read in his obituary that he had found religion and really gotten right with the people is his world. A good reminder to never ever give up on people.

END_OF_DOCUMENT_TOKEN_TO_BE_REPLACED 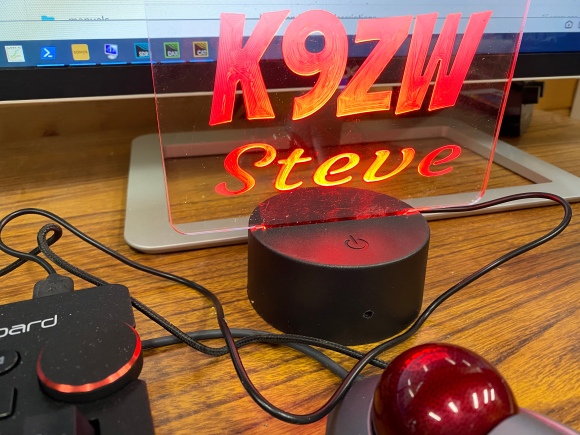 Actually two but this is the illuminated one, as the other is a raw carving of my callsign into a piece of “purple heart” wood.  I’ll post a picture of that CNC carved sign when I my finish work is done.

Dale N6JSX has some new toys, 3D engravers, printers and and CNC hobbyist level gear, and is making a lot of items for relatives.

Much appreciated and looks rather cool on my operating desk!  THANKS DALE N6JSX!!

My hiatus from blogging is not complete, as I am 75% through spreading 36 yards of mulch which is around 500 garden center sized bags.  Had a bulk delivery which the XYL claims is more about being able to use the skidsteer and lawn tractors than the savings (in bulk my cost was about 30% of buying it in bags, though the savings would be less if I waited for a garden center sale.)

A lot of Garden Mulch!  Right in front of the Radio Room, so I can’t ignore it either!

I do have a couple drafts that will be finished up and posted while I am still shoveling and of course involved in the important project that I need to do.

The Antennas still need to be assembled, as the mulch was a very overdue “honey do” that threatened to interfere with radio activities if I put it off any longer.

I think the T-28 will be easy but the T-12HD really need a set of helping hands.  Any volunteers?