Doing my end-of-month paperwork and stunned how quickly August has raced by.

The massive amount of time to handle computer problems and cover for an ill colleague (who is fine now) pretty much used up the time I’d usually set aside to be on the air, and the time to work at this writing project.

We’ve also seen the effort it takes to get our family’s oldest child off to engineering school as a new Freshman.  Tom KC9JGD seems to be settling in well at Michigan Technological University as a Freshman Chemical Engineering & Army ROTC candidate.  Push-ups & chemical reaction-rates – quite a combination.

We’ve had the pleasure of having a Basque visitor – our High School AFS Student who stayed with my family has been visiting with his better-half and young daughter.  Awesome to see Juan and his family.  Life is good!

September is more often the season of overseas guests for our household, and 2008 is not an exception.  We’ll have English houseguests for at least part of the month.

Radios have been on and then often turned back off after a half-hour of mostly listening each time.  Bands are not very inspiring, to be kind about it.  Really need to get my main digital set-up running, as that usually works well when everything else is weak.

Nixie Tubes – a Blast from the Past

In the midst of the all my computer chaos I’ve also started another project – building a Nixie Tube Clock kit.

What are Nixie Tubes?  They are a Cold Cathode Display Tube harkening back to the Cold War.  For the most part most Western Countries dropped Nixie Tubes in the Early to Mid 1970s, but the former USSR kept them in production another 20 years.

Nixie Tube of the type I am using

The Clock Kit I’m doing was sold by a UK based Nixie Specialist and uses the IN-12 & IN-17 size tubes.

I’ve something quite different in mind for my case.

Former USSR countries are  the primary source for bulk Nixie Tubes, and though these tubes have rated lifetimes measured in many decades bulk packs of spare IN-12 & IN-17 tubes were also sourced, along with a good supply of the FET transistors and driver micro chips for further experimentation.

Will do some build pictures for a follow up.

Heh, just a small gasp of air and a quick note where attentions have been.

As mentioned in a previous post “Servers, Drivers and Time – Oh My!” a main server at work “caught the flu” and has been giving grief.

The first wave of problems and repairs were followed by a second, and then a third.  Each more serious.

Much of the repairs then needed ended up a team effort between myself, the hardware specialist and the network specialists.  In the end the machine was physically gone through, numerous components replaced and the server rebuilt.

Tape backups let us recover to a reasonably close date, as the combined hardware/software “melt down” did spoil the last working day’s data entry & transactions.  Seems it reported to the backup software that “No Files Have Changed”  and claimed “Successful Backup Complete” after a multi-hour job had run but a moment or two.

The failure sequence is interesting, as devices intended to reduce the risk of failure were the problems. The backplane of the server’s RAID physical server array failed, taking out one of the five drives completely while damaging the data on the remaining enough to negate the advantages of Mirroring, Striping and Stand-By Hot Swap drives.

Once the backplane was replaced it was another 12 hours until the Host Drive failed and the magnitude of the data damage to the other drives became apparent.

In condensed version, with much help the unit was physically repaired, the RAID array rebuilt, Data restored from tape  and then all the active directory & SQL database nuances repaired.

We’ve also started a replacement server build, as I have little faith in hardware that suddenly shows an unexplained series of failures.

The ongoing epiphenomenon might be ended, but as there is no way to predict if this sequence of failures will not restart, the server gets replaced.

Technology moves along so rapidly that the update will take this server from a Single Pentium Server Processor to dual Quad-Core Xenon Processors.  The RAID array jumps both in size to about 1/2 TB but greatly in read-write & data throughput speeds.

In the midst time was made for a visiting Basque friend & his family, a family reunion, and getting Tom KC9JGD off to Freshman Orientation at Michigan Technological University 4-1/2 hours away.

More one each of these and release of some of the draft articles I just didn’t have time to finish in the next weeks.

One, Two, Three, What Are We Drilling For? – Emcomm Training for Unlikely Events

Sorry Country Joe for borrowing the inspiration for the title, but really have you asked yourself what your local Emcomm Group is Drilling for?

Not so many years ago we did Message Handling practice and basic net operations.

Now we have let served agencies and bribes by the way of grants from various government organizations decide for us that we will do their Message Formats and focus on their “Professionalization” courses.

We’ve become so worried about not getting our slice of “government cheese” as EmGov monies are offered for remolded versions of ARES & RACES, that we’ve not only agreed to the Sisyphian tasks of endless drills for THEIR purposes, but given up the capabilities & self-leadership that were ours.

Subtle difference between training to be able to serve served agencies and having served agencies decide how we train perhaps, but one that has led us to drop so much of what we’ve been doing, dropped without discussion, in exchange for the heady entry into an addiction for patronage and a place at the post-9/11 & post-Katrina EmGov table.

Co-opted into endless courses with vague if not all but absent relevance to our dedication – radio communication – we’ve even embraced some of notion to replace our traditional modes (CW & SSB) with highly proprietary digital offerings that reduce each Emcomm volunteer to either a human-manned Router in Internet Style, or fobbed off as a vassal in servitude of the served agency.

The Red Cross recognized this change first by demanding ARES/RACES Emcomm volunteers formally submit to background checks and pushing for Red Cross membership as “dual hat” volunteers.  Who would pass on the opportunity to increase their agency’s trained and vetted volunteer resources?  Taking over another service group by co-opting them from leadership on down would be hard, would it?

The EmGov groups have followed with expectations of their own -at first with ARRL CEC Courses, but then with ICS Courses, FEMA Courses and other courses as they wrestled the training function away from our ARRL.  For the larger part the Emcomm Levels I, II & III are considered worthless by EmGov.

And one asks what have we given up our own structures for?

And have we noticed that the real EmGov communication has moved onto dedicated gear, frequencies and secure modes that we don’t share?

I hunter at the end of a gameless field is wise enough to call his dog, unload his gun and head home.  He doesn’t continue to walk the barren field imagining somehow that a gamebird will form from the muck itself.

Why will Radio Amateurs and our Organized Bodies not be as wise?

We have a role, doing what we’ve done well within the licenses & technologies afforded to us, of being the communicators who get through when all else has failed.

We’ve done that by being wise enough to avoid entanglements with organizations, structures and training that lacks our focus.

We’ve done this by believing what we’ve proven to ourselves over and over – that we can communicate when the chips are down.

The proposal to cut RACES loose as a sacrifice to the EmGov & Served Agencies, while reforming a real ARES in the form of actual amateur operations, controlled & lead by real amateurs, sounds like a distinctly suited solution to this problem.

And then we could call an end to the nonsense training, the drills made up by outsiders and get back to message handling, emergency communication techniques and regain some purpose.

We would no longer be wondering “One, Two, Three, What Are We Drilling For?” 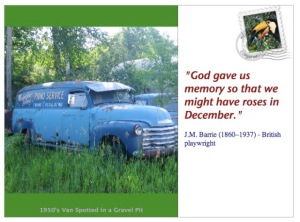 Using a third-party program (which will be explained later) I’m restarting the iCard Series.

These are my one major non-Amateur Radio contribution in this blog.

Servers, Drivers and Time – Oh My!

Updates to With Varying Frequency will have to wait until an unplanned Server Room project is finished.

RAID (Redundant Array of Independent Drives) setups are supposed to be pretty fail-safe.

That is until some of their components stop working.

Not an end-of-the-world dead-drive thing like by MacBook had been prone to, but a scramble to find appropriate parts to get the server back in service.

But usually I never have a real “down” if gear fails.

The server demanding attention is a legacy machine, and at the time the costs of an idled spare machine were not in budget.

And of course the idea was you could get spares within a day or two.

Well time has moved on, and spares in a day or two isn’t acceptable downtime anymore.  Vintage Spare (yes anything over 5 years old is vintage in the world of computers – some say anything more than 24 months from production is obsolete “old stuff!”) parts are hard to come by.

Maybe having two identical, regardless of cost, isn’t such a bad idea after all?