Here is a screen shot: 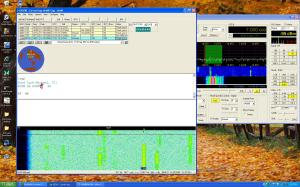 I’ve a ways to go to make this all work as I would like it to.

BTW with the speed of the new machine it looks like all my logs could be merged.  I had avoided this on the old XP Box as it was easily overwhelmed whenever my logfile got big.

For details on the setup using MixW and VAC see the Knowledge Base and Manuals at Flex-Radio.

Having seen a large add in “Nuts & Volts” magazine, I had a look at Solder By Numbers Website

I’ve created a Solder by Numbers profile as Steve K9ZW and will see what develops!

I am an occasional check-in for the “Every Night 160m Net,” a roundtable with Tom KC8QGJ often as the facilitator.

Tonight, even though noise was a solid S-9, I had no problem checking with with the new Flex-5000A. 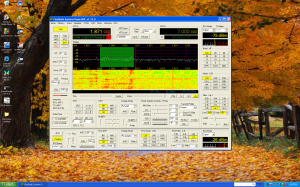 Running with my solid Alpha-78 Amp into a W9INN Half-Sloper I was pleased to get very good signal and audio reports.

I had the Flex-5000A set to “PanaFall” where the Panadaptor is above a fully synced waterfull.  In the pictures I have it blow up to show detail and the yellow of the S-9 noise is pretty striking.

In the settings I started working with the various filters and an VERY interesting Binaural differential stereo selection.  Haven’t even gotten close to worrying about the added in receiver unit.

Working with a computer driven radio the last several years, I had grown fond of the Remote Tuning Pod of my TenTec Pegasus and TenTec Jupiter.

While the radios needed a computer to run, I need a Knob to tune.

When the Flex-5000A arrived I went “knob-less” and found quickly it was a bad idea for my style of operating.

It wasn’t a handful of QSOs before I dug out a Griffith PowerMate “Knob” and set it up with the Toshiba Laptop.

The TenTec Pod had lots of buttons to program for one’s operating taste.

With the PowerMate I went from No-Knob to Knob, but wanting more.

I’ll wait until I have the new Dell 100% up to install the ShuttlePro and configure the Flex-5000A to run with the device.

The switch to the Dell Core Duo machine has done just the trick.

Was up in running in less than 15 minutes, including all the Dell set-up gyrations.

Absolute screamer of a Windows box.   Silly messages came up “This next step will take 3 to 6 minutes depending on your machine” and the new Dell had it done in seconds.

Fast enough on the installs that I worried it wasn’t taking right.

No problem installing the Flex-5000A drivers or Software.

Was on the air in moments.

Yeah – this is the way it should be!

More after the weekend – I will sit in the woods for a few hours hunting, so the new computer will likely sit until end of the weekend.

Ok, the Flex-Radio works, but dang the computer side is giving me grief.

I have it running reasonably well from a Toshiba Laptop running Vista (32 bit).

Wanting to power up the system correctly, I bought an HP AMD Phenrom Quad Core desktop, loaded to the gills.

BUT I didn’t pay attention to the couched Windows 64 bit operating systems don’t play well warning on the Flex-Radio website, and the warning completely lacked a statement like “and Flex Radio doesn’t play AT ALL with Vista 64 bit SP1 or other fully updated Vista 64 bit versions.”

There is no working & signed driver for Vista 64 bit for the Flex Radio.

So the suggestion is to dual boot with Windows XP until a signed 64 bit driver is available.

Having a legal XP install bought for a machine since dismantled for parts, I set off to do this.

Bluntly it beyond a pain and after four-five hours of grafting at it all I have done is upset the original Vista install enough to ask if it should boot Vista on power up.

So off to “Plan B” and ordered a Firewire Card for the old Dell.  Figure that I could get it to play with the Flex-5000A enough to hold me over for a bit.

How about old Dells putting out different PCI Buss voltages than the modern card expected and XP failing to recognize – or apparently even sense – the new hardware card.

Another hour or so wasted screwing around.

So back to the new HP for another attempt, this time carefully researching the SATA drivers needed to install XP as a second operating system.

While not a fiasco, it was another hour frittered for naught.

Having had enough of this rubbish – crazy Windows “Three Bears” fairy tale nonsense where the respective machines were either too new or too old, operating systems to advanced or too behind, hardware either too feeble to give any rear umph or too speedy to allow older hardware to be added…. and so on.

Rather than chucking it in, as the Flex-5000A really DOES look like the rig I want to do my next 5000 QSOs with, I broke down and ordered a new Dell Desktop to the Flex-Radio specification of what they know will work.  Intel Dual Core, lots of cache in teh version I upgraded to, lots of RAM, dual hard drives (with my hard drive luck the second one will be kept mirroring the first one), factory IEEE 1394 Firewire ports, running Windows XP Professional (32 bit) and so on….

Should be here this week yet.

The HP is going to my office to be my workstation/media center, replacing an old Pentium 4 box and giving me a chance to learn more about working with a Vista 64 bit machine.

The old Dell will be retired once everything is up and going with the new Dell.

The new Dell should be ready to go except for set-up, installing the software packages I use and installing a PCI card that will add a bunch of serial ports (shack control) and single Parallel port (many SO2R boxes use parallel for various reasons).

To think that I could have had upwards of 8 hours more on the air without all this bother.