Will you allow a Slave to build your next Transceiver and HT?

As it turns out that a portion of our imported technology has been built by slaves, are you good with being a modern day slave owner through the pursuit of your hobby?

First what is meant by a slave – for the purpose of this post I will use the simplistic definition of a person who has no freewill in most aspects of their life, lacks personal freedom, and is bound to their employer/exploiter.

Not a perfect definition, but I think it will include imprisoned labor, traditional slavery, and the massively controlled labor in a lot of circumstances.

And these enslaved peoples build some of our technology.

And of course ham radio gear falls into what they build.

So what does an ethical ham do?  Buy something cheap where the labor has a reasonable possibility or being slave or near-slave?  Do that really quick and shut your eyes to the injustice?

Or do you support one of the several manufacturers who use domestic or known free-labor workers?

Surprisingly some of our domestic gear is fabricated with incarcerated labor – prisoners purportedly on skills development programs build some ham radio gear.

Now that is a real ethical conundrum, do you accept benefiting from their buck-an-hour or less labor as a moral cost to providing these prisoners training?  Do any of these trained folk actually get jobs building electronics when their sentences are up?

All moral decisions a ham should consider.

What do you do?

(I’ve avoided naming companies as I want to challenge the ham community to think about what is important to us, rather than take anybody to task.  For the record my stations are built around gear purchases intended to minimize the use of labor with people with questionable freedoms.   There are some instances where the only available technology doesn’t appear to be clear of labor issues though.  I’ve not found a viable way around those instances.)

I caught part, as I wouldn’t willingly lose a perfect day of weather to be online. Especially when the event was recorded for future review.

The weather is something to consider for future virtual events, as where a real physical Hamfest be fits from decent weather, the opposite is the case for a virtualized event.

I will review what I missed some rainy day.

hope we see more of these events!

Skyneedle and Hexbeam – Slow Progress and Other Tasks

Have been working on the Hexbeam replacing the Generation-One wire guides with anew design supplied by RadioWavz. RadioWavz worked hard to get the needed parts to me to meet a scheduled crane date that was rained out. So I am rescheduled alter this month. 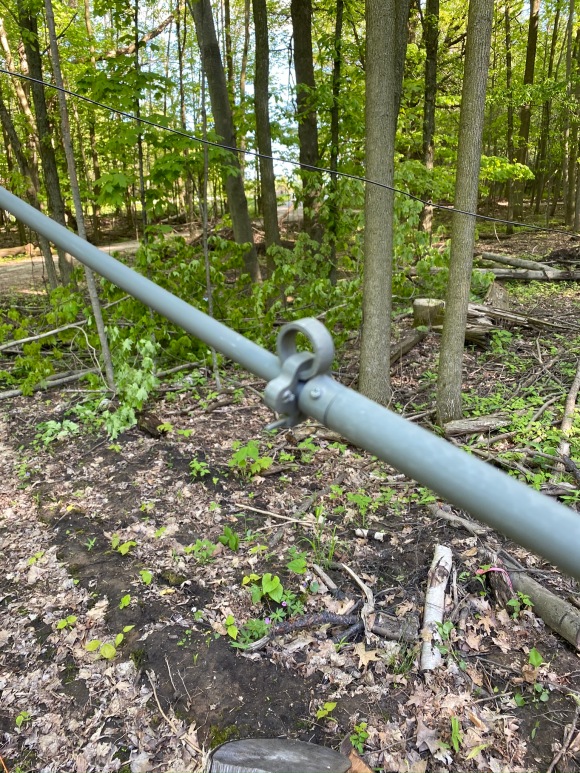 Here is a photo of the center post. Winston KC9FVR has been helping me put the antenna together. 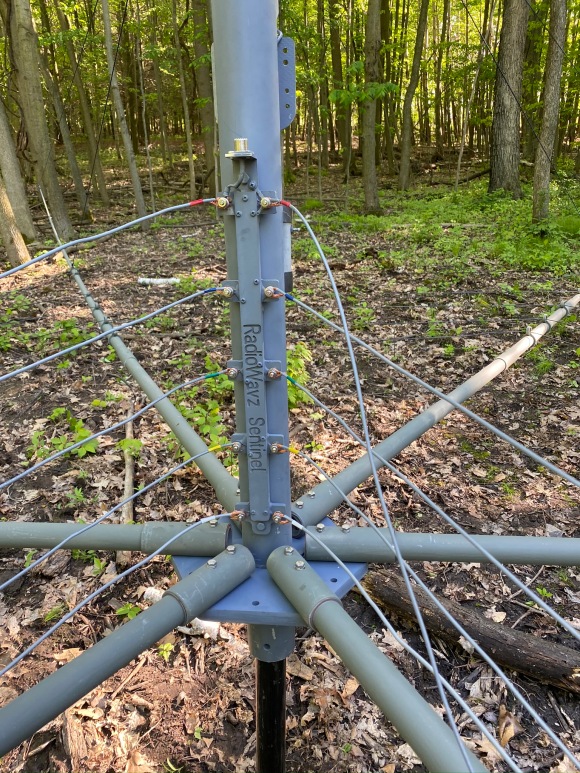 Now let’s start with one of the weeks distractions – trees falling down. Across the road is one of ours, which with some great help from Vern K9EME was moved off the roadway to wait cooler weather. Not only has it been raining but it has been in the high 80’s/mid-90’s this week. (31 to 36c) 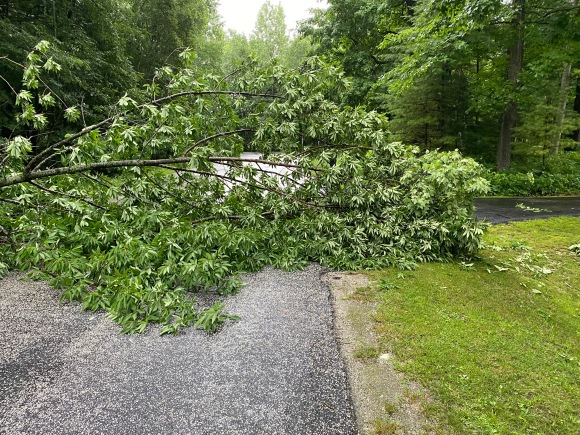 Top of our tree that fell across the roadway. Most of the tree was off the road.

END_OF_DOCUMENT_TOKEN_TO_BE_REPLACED

My backup Flex-6700 took a trip to Austin TX as it’s OLED had failed, and I wanted to have it get a full checkout.

As it was a non-urgent service need, it didn’t warrant priority handling, and once we determined it needed to come in for repairs I waited for a RMA to be issued.

FRS is managing their RMAs to keep things flowing, but to avoid having radios show up too far before their quarantine period.

END_OF_DOCUMENT_TOKEN_TO_BE_REPLACED

Shipment Packaging Illusions – Why 1/4 inch bubble wrap, crumpled newspapers and the like are useless 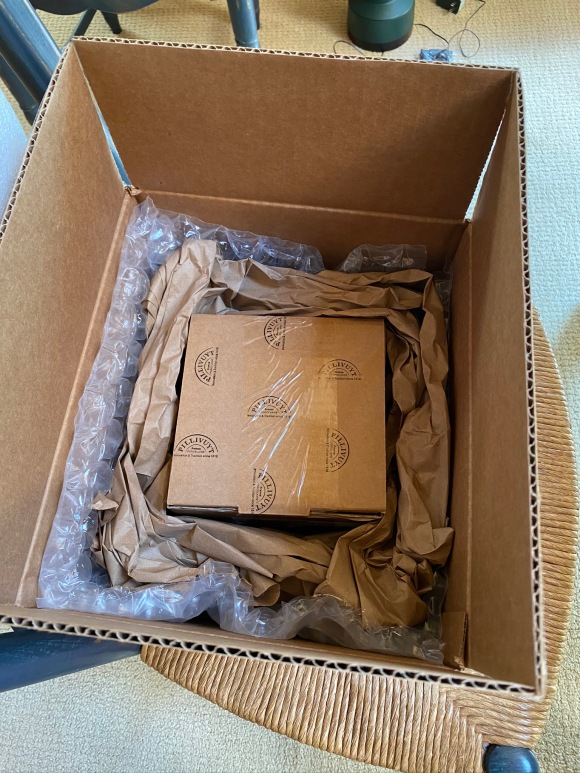 A reasonable example of over-packaging

Recently I have had a series of inbound shipments where the person packaging the item for shipment said they knew how to prepare a shipment, but they did a very risky packaging job.

I lucked out as it seems, as damages were mostly avoided. But bitter past experience is that if the electronics or musical instruments had been damaged that shipping insurance would not cover the loss.

Reality is insurance is some protection from unanticipated events, but is no cover for taking unreasonable risks by packaging poorly.

The usual line is to use the Manufacturer’s original packaging, and then a suitable over-packaging.

Well that is idealistic at best, as gear is usually long separated from any original packaging, some gear never had packaging ready for modern shipping in the first place, and usually there is minimal information on how to prepared the gear before it even goes into the packaging. And truth be known, people are cheap and want to avoid disassembly with shipments becomeing multiple packages. END_OF_DOCUMENT_TOKEN_TO_BE_REPLACED

These weeks household repairs have overtaken Amateur Radio as equipment failures have led to replacing our entire HVAC system AND replacing our Refrigerator.  So my QSO count is way down, matching the decline in my checkbook balance!

One thing that came through crystal clear while sorting the replacements out was Equipment Availability is the #1 critical factor – Supply has fallen way behind the high level of demand.

Our HVAC contractor was very good about securing the equipment we needed, as rather than another expensive repair we decided to do a full system replacement.  Still they had to wait until all the components were available which threw off their scheduling and left us nursemaid to a failing system that had to be manually reset daily to function.  Of course the failure timed itself to fall when temperatures were at the 90-95F peak (32-35c if you do metric) – it wouldn’t be a fun failure if it didn’t wait until things were heavily needed.

Where we really hit the Supply-side problems is with the refrigerator.  Our old Kenmore Elite was 8 years old, but depended on a sealed system (meaning field replaceable rather than repairable) cooling system that sprung a leak.  Basically it was done for, uneconomic to overhaul, and as we found out after hours of on-line chat and phones calls would take 2-3 months to be repaired. That is IF repair parts would be available on time.

Not waiting for months while living out of a cooler chest on our kitchen floor with main food storage on another level of the house in our backup refrigerator.
END_OF_DOCUMENT_TOKEN_TO_BE_REPLACED