What Time is it? Can you hear me? FT8 Timing Issues – Part 2

Spent some time just watching FT8 waterfalls, where it is obvious that some stations are off timing.

What is telling that quite a few seem to be on the same “off” together, suggesting that there may be a computer clock induced issue.

Ragged Finish to an FT8 Cycle

Ragged Start to an FT8 Cycle

My theory is that many stations experienced the same NTP issue simultaneously moves their time sync off in-mass.

If the cumulative offset is too much, decoding stops and the operator will look for a fix, otherwise they will continue on.

There are specifications to all this, but as I mentioned upgrading my NTP service to the latest sorted out my PCs.

What Time is it? Can you hear me? FT8 Timing/Sound Woes and Corrections

Time is important to do Digital Modes

One of the workstations I remotely use to run my stations is under enterprise update control, resulting in less say when patches and updates get applied.

Seems the latest round of updates messed with two things – time and sound. Kind of the two most important parts to run a timed digital mode like FT8!

END_OF_DOCUMENT_TOKEN_TO_BE_REPLACED

Received first a Text Message supposedly from our Cable/Internet provider responding to a request for service I never made.

Then a Robocall Phone Message was left confirming the service appointment.  That call came from a spoofed phone number.  It spoke how the service problem was corrected remotely, as we had no issues nor had reported them I would guess that the scammer needed to figure out a way to still try to make a visit, but that the tech would come check things anyway.

When I called my actual Cable/Internet provider they confirmed there was no open ticket, and then suggested we contact our local police.

They also cautioned that if any emails would arrive about this obviously fake service call, do not click on the links.

END_OF_DOCUMENT_TOKEN_TO_BE_REPLACED

Writing this on Bastille Day 2021, and hours ago a transporter delivered a 1981 Citroen CX 2400 Pallas Automatic bought in France December 2020, renovated in Holland January to April 2021, and on what must have been a slow boat for the last 8 weeks of land/sea/land transportation.

CX Pallas tucked away after arrival in Wisconsin 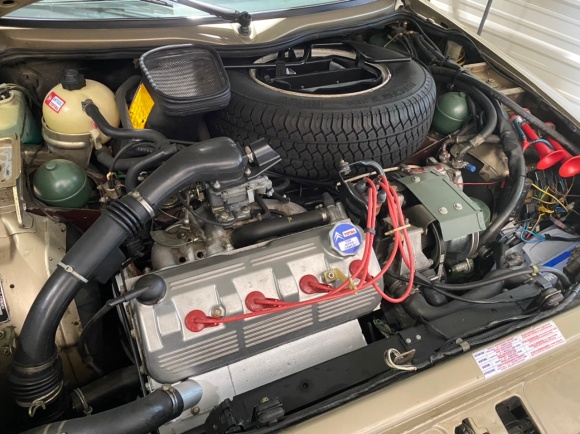 A view of the Engine Compartment

Another tucked-away photo – will be waiting for the Wis. DMV paperwork to drive it on the street

My friend Jeremy located the car late in 2020 while he was in France as the widow who had the car had engaged help to sell her late husband’s cars. Based on my friend’s observations, videos and photos I purchased the car as there was no way I could get to France. What interested me about this car is the rust-free and unmolested single-owner history and relatively low miles. So I am the second owner of this 40 year old beauty!

END_OF_DOCUMENT_TOKEN_TO_BE_REPLACED

A quite interesting QRZ Thread about an perhaps abandoned transmitter…

“Strong ‘Fallout 3’ vibes,” says the radio amateur who discovered it.

Not everyone pays the most attention to AM radio. To some, talk is talk and fuzzy signals are exactly that. Still, it’d be odd if the same broadcast looped continuously for eight years without anyone noticing—but it’s not impossible.

As it turns out, that very scenario took place up until this week in Washington D.C. where an AM radio station had been broadcasting the same traffic report since 2013, and nobody seems to know why.

What in interesting is one of the following comments (page 2) is from someone that I briefly worked under overseas.

Posted by CW4 (Ret.) Dave Mann N4CVX – This “Mystery Transmitter” is very close to a survey done in 1978 of the Pentagon Rooftop.

At the time I was specializing in Technical Surveillance Countermeasures (TSCM). Anyway, our detachment commander was asked by the Secretary of Defense to “Survey the roof and find out what’s up there”.

So, about 10 of us Technicians went to the roof — not easy to do as there was only one entry, a metal stair from the 5th Floor “A” Ring hidden behind a steel security door. Turns out the door hadn’t been opened in several years and we had to drill out the combination lock.

Once up there we swept the whole area a suite of receivers, Racal, Microtel, Stoddard VLF, and CEI, which received from about 100kHz to 2.5 gHz. Every antenna was tagged and plotted in place. Many of them didn’t have coax to them and had been abandoned in place years before; those we simply removed and piled up.

The Sec Def office sent out a letter to all offices in the building telling them that if they had antennas on the roof they were required to “Claim Them” and after 45 days of no response the mystery antennas would be removed.

A lot of the signals which we received were data bursts, a few had CW ID’s with a “WAR-nnnn” callsign (“WAR-nnnn” is the official ID for Washington Area Radio) and a lot of point to point UHF voice links. No problem.

After that 45-day period expired we went back up with bolt cutters. The one and only complaint received was from a tiny office in the Navy area that “Our TV isn’t working anymore”.

We removed about 75 “mystery” antennas — and lo and behold — a number of the previously recorded and plotted “data bursts” disappeared. We were sure that they were probably clandestine listening devices sending back to the Embassy of the USSR, which was (of course) Line of Sight and 6.35 miles from the Pentagon.

Wish I could have taken one of the huge Log Periodics on 75-foot towers back home HI HI. (BTW, there were only two of us on the team who knew Morse, me as a Ham and another Warrant Officer who was a former Morse Intercept Technician).

How many more zombie transmitters are out there, and do they have a secondary or secret purpose?