Next weekend is the CQ WPX SSB contest, and I have a chace of putting in a better than average (for me) showing.

Period of Operation: 48 hours. Single Operator stations may operate 36 of the 48 hours – off times must be a minimum of 60 minutes during which no QSO is logged.

Single Operator Overlay Categories: Single Operator entrants above may also submit their log for one of the categories shown below by adding an additional line in the Cabrillo log file header called CATEGORY-OVERLAY. All Overlay entries are grouped into high power and low power in the results.

(a) Tribander/Single Element (TB-WIRES): During the contest an entrant shall use only one (1) tribander (any type, with a single feed line from the transmitter to the antenna) for 10, 15, and 20 meters and single-element antennas on 40, 80, and 160 meters.

I have several Easter Weekend events at Church and with Family, but I do think I can squeeze in at least a 1/3 available hours effort. SOmewhat concerned that the time slots I have opne are not looking very productive for propagation.

Big thing to get ready is to get a Voice Keyer up and running. I was loosing my voice during the Wisconsin QSO party and was only only a bit more than 2 hours.

I should quality for the TB-WIRES overlay endorsement.

Hope to catch you on the air next weekend!

Today was the 2013 Wisconsin QSO Party. I was able to get on the air for over a 1/3 of the time, having family commitments to work around.

My station was Single Operator – High Power as I did run the SPE Expert at 400 watts pushing me out of the standard category.

I used N3FJP’s Wisconsin QSO Logging Software, which as always worked the treat.

Tomorrow evening I will recheck my log and submit it.

Given our wet damp weather, this was a really fun way to spend (part of) a Sunday afternoon.

I did have two anomalies I will be working to see if I can reproduce:

Both bear watching and will get reported if I can reproduce them.

Only made 100 some contacts, so hardly an contestor’s effort, as I had other things on.

A Few Minutes at the 2009 ARRL DX SSB Contest

I was only able to run the contest for 90 minutes but did get over forty countries, 14 on more than one band.  Forgot how neat of a contest this one is.  I have suggested our local club (W9DK Mancorad)  plan to include it in 2010 as a club activity!
73
Steve
K9ZW
—————–
Tagged Contesting, DX, K9ZW, K9ZW Operations, Mancorad, W9DK
Leave a comment
Amateur Radio, DX Interests, K9ZW Learned, K9ZW Recommends

At Contest University 2008 the importance of this book was again stressed, and a discount coupon to buy a copy was part of the CU packet.  Here is my write-up & review of the book from 2007.  It is also being reposted as it was done before Tags and RSS feeds were implemented for this blog.

At Dayton 2007’s Contest University one book on the important issue of station design for Multi Stations and SO2R (Single Operator Two Radios) Stations was mentioned by several of instructors. 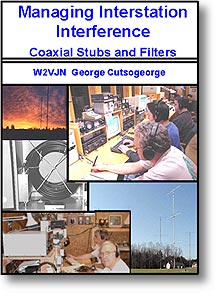 During the Dayton show I made a beeline to the INRAD booth to buy three copies – one for my local club, one for my Dayton traveling partner George W9EVT and one for my amateur radio library.

I found George W9EVT speaking with a long lost old time High-Speed CW contact who had worked Skeds for years between them. Imagine my surprise to find that with the books fresh in hand that this CW expert was none other than George W9JVN – Author of the Books!!

I mentioned how this book had received multiple mentions and recommendations during the Contest University and how I appreciated meeting the Author in person.

From the introduction of the book:

Whenever two or more transceivers are used in close proximity there is some level of interference involved. This level can vary from practically no problem to actually burning up components in the receiving radio. The purpose of this book is to identify and quantify the various parameters that create the interference and to show methods that will reduce or eliminate it.

My read of the book since Dayton has found that the CTU Profs understated the quality and usefulness of the information in this book. And that the book has not gone unnoticed by other experts:

ON4UN says:
“George [W9JVN] covers every imaginable
aspect of the interference
problem in this book…”

The actual stubs can either be designed and made by the amateur themselves, or one of George’s other businesses Top Ten Devices offers W2VJN’s Stubs as a commercial product:

Band Reject Coaxial Stubs
Every multi-transmitter environment suffers to some extent from harmonic interferences. In some cases, coupling due to closeness of antennas is sufficiently high that potentially damaging voltages may be present at the receiver terminals. Harmonics can be so strong that operation within 25 or 50 kHz is not possible due to receiver overload. Application of band reject coaxial stubs will reduce transmitted harmonics from the final amplifier and reduce fundamental pickup as well. This translates to fewer complaints from the operators, higher contest scores, and reduced risk of receiver front end damage.

Approximately 30 dB of harmonic attenuation can be expected from a single stub. Lumped constant filters can also provide the mentioned benefits, but none are available for amateur use unless they are home built. Top Ten Devices uses high quality RG-213 coax with a silver plated, teflon PL259 and heat shrink tubing on the shorted or open end. Rated ultra-conservatively at 1.5 kW continuous duty operation, these stubs will last a lifetime.

Stubs are manufactured to order and are individually trimmed with a Hewlett Packard network analyzer to +/-10kHz. When ordering, please specify CW or SSB, and the stub will be cut to plus 25 kHz from the sub band edge.

A single stub can be connected to the output of an amplifier with a UHF tee connector. For multi band operation, the stub(s) may be connected after the antenna switch. There is no requirement for a specific length of coax between the amplifier and the stub. Well shielded line should be used to prevent radiation of harmonics before they get to the stub. Two or more stubs for a given band may be used together. For example, a CS-4 and a CS-5 together will null 40,15 and 10. They would be connected with two UHF tee connectors close to the amplifier, if possible, to minimize pick up or radiation on the connecting lead. For stations where the amplifier is used on more than one band, automatic stub switching can be accomplished [and the] station antennas can be switched at the same time.

It is worth noting that not only has George W9VJN passed on what he has learned in his book, he is ensuring that his product knowledge & products remain available by passing the torch at INRAD. International Radio now in the very capable hands of new owners Trey, N5KO, and Mark, AG9A with George staying involved in the development of new products.

Ok, so from the start the CQ WW contest was never a main objective of a rapidly planned run to W9EVT’s QTH on Washington Island WI-001L.

But who would have planned for high winds requiring the towers to be down, extended rain to add to the fun, a laptop hard drive that went “ping” within hours of arrival, finding the Yaesu FT-950 DIN pins have nothing to do with any other Yaesu product making the cables I brought along useless to run a linear, sudden serious tower troubles with one tower that put the Mosely 96S, Bruce Array and Loop off line, and a couple bad commercially made co-ax jumpers that gave false SWR errors on certain otherwise good antennas while they were in use?

On the plus side I did get a fair bit of time with the FT-950 and a wonderful combination of the Ten-Tec Omni-VII and Expert Amp. Also spent quite a while operating the IC-7800.

The TimeWave AntennaSmith came in handy, though the foul weather kept towers down and operators inside so we didn’t get to work with the Riserbond TDR and the ex-Military Megger.

More over the next couple days after I unpack and sort something out for Laptop repair.