For Want of Nail, Nothing Like an Upgrade to Peak Interest, and Playing with Go-Kit Gear

In the run up to Dayton my Shack Computer had been acting up. Latency Spikes and gremlins that were giving PowerSDR no end of grief. Thought a decent dual-core Dell, I was even considering replacing the machine.

On return from Dayton middle son Winston KC9FVR/AG asked if we could run up the station so he could try some PSK31, having been reading the Digital HF book bought at the ARRL booth. We couldn’t get things to run very smoothly and after a very rapid shutdown in response to a sudden lightening storm powerful enough to set fire to buildings only 10 blocks away, the system would no longer recognize the Flex-5000A hardware.

Utilities and Testing showed that the OEM Dell Firewire card gave up the ghost.

Quick research at the Flex-Radio Knowledge Center & Forum Archives identified the best cards for performance and roughly $25 later a card was on its way rushing from Amazon.

Took the downtime to do ALL updates – from BIOS to any driver/software/system update that could be done. Also left the machine running a very in-depth anti-virus scan which ran overnight (all clean enough to pass).

The new card was truly PnP (Plug-n-Play) and despite having a different chipset than advertised (putting it into an OK-class rather than preferred-class for PowerSDR use) the system quickly reinstalled the “Found New Hardware” of the Flex-5000A.

Operator error led me to fight with VAC (Virtual Audio Cables) and settings – trouble I could have avoided by a simple reboot.

Once running it was lickety-split to help Winston KC9FVR/AG put a handful of PSK31 QSOs under his belt.

The drive that comes from a fresh license upgrade and an experimenter’s mindset had Winston KC9FVR/AG quickly asking – can I run fldigi from my Linux Thinkpad using some of your other gear?

So to the garage to raid the go-kit stash.

Up went the 20m Hamstick Dipole on 12 feet of surplus cameo-poles and a trial of a Small Wonder Labs PSK-20 I had ended up with somewhere along the way.

We had little joy with this setup, and it is uncertain if the PSK-20 is needing repairs or if we were struggling with Linux sound issues.

So out came the SGC-2020 Transceiver and the NUE-PSK Modem. This combination hadn’t really been used. The NUE-PSK modem had come back a few weeks ago from a full update at Midnight Solutions bringing it up to Version 5 with all the add-on features, and the transceiver had been run but once.

Plugged in the SGC-2020 and cabled up the NUE-PSK and “PING” we were on the air just that quick.

Winston KC9FVR/AG complete a QSO and then declared the micro-keyboard “worse than texting” and dug out an old full sized IBM clicky-clicky keyboard which worked wonderful.

Of course we weren’t about to read the manuals any further than the absolute basics to get things running, so we were hand-typing everything. Macros are for sissies (or for those who read the manuals).

Winston KC9FVR/AG downloaded a PSK31 app for his Android Phone and it was neat to see it decode from the speaker’s sound output.

I ran a handful of QSOs (it is sure a lot easier to type “K9ZW” than what it took him to type “KC9FVR/AG”) before we put the station away (took ten minutes to pick up everything and store it again.)

My go-kit HF gear did digital just fine! Power needs are such that I think I could get more than 12-18 hours of full duty out of each of the gell-cells I have set aside from their storage charge levels, and days if they were topped off first.

Remember that “spark of interest” that comes with a fresh license upgrade? Well it was back down to the shack to run a couple 20m & 160m JT65 demo contacts before promising each other that we would run some Hellschreiber on the weekend.

A couple things learned – in terms of the station the dead firewire card really put the main station out of commission. “For want of a Nail” they say the battle was lost, and for want of a working firewire port the station was off the air. Critical Key Component Dependency is not unique to an SDR setup, as most stations lack backups for mission critical items. Almost nobody has a spare for each item in their station.

Then the joy of seeing an inquisitive mind wanting to explore amateur radio shouldn’t be missing from an operator’s life. It was wonderful to help Winston KC9FVR/AG explore digital-HF and heartwarming that he would only let this father retire for the evening by making a promise for “more radios, more!” on the weekend!

And lastly that it is great fun to pull out the go-kit gear and give it a whirl. Couldn’t think of a finer father-son activity to put one’s work day aside.

Here I’m stuck with serious Ice still on all my antennas after a full week from the “big storm.” Mother Nature sure was quick in the issue of the Ice and now is so slow in providing any relief melt. Sun is too weak and the temperatures too low to loosen more than 1/3 of the ice load.

Standing underneath to work mechanisms hoping the ice clears without damage wouldn’t be very safe. Two-Three pound chunks of ice falling 40-to-70 feet could do some damage. Also fear causing more damage by horsing the ice off. Safety first and then the knowledge that active efforts could make a small project in patience into a huge project in repairs, make waiting the ice out the best idea.

So I’ve been inventorying by electronic “to-build” kits and thinking about which to tackle next. For the most part I had reserved the present kits for deep winter builds – during that long stretch between New Years & Easter. Guess I will just move at least one kit forward.

On the shelf are a full range of kits:

Followed by the Retro-75 AM QRP Transceiver:

The HF Packer-Amp would seem a natural third build if winter holds on that long: 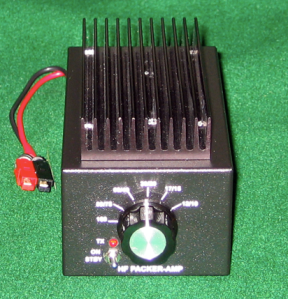 And the Tuna-Tin Kits (with the various Nixie Tube Clocks) will wait for another season:

QRPMe Tuna Tin Kits "in the Can"

The Retro-75 Board Kit has arrived this week. It came in two parts, everything but one component which arrived separately a few days latter (there was a note in the first package).

I’ve a satellite antenna project with my son Victor KC9NWB and a frequency reference for my shack to finish, both “on the bench” to complete first, putting the Retro-75 into a May build.

That will give me time to layout & source an enclosure, the second crystal socket & switch I will install and have those items on hand for the build.

My initial post on the Retro-75 is at: Going Retro on 75m AM – Small Wonder Labs Kit

I’m planning to shoot pictures and write something about all three projects as they go along.

Based on write-ups and recommendations from Scott NE1RD and Jeff KE9V, I took at look at Dave K1SWL’s newest offering “The ‘Retro-75’ 75/80 Meter AM Transceiver board kit.”

Although AM has long been supplanted by more effective modes of communication, AM activity is largely channelized into ‘watering hole’ frequencies2. It’s therefore pretty easy to find activity on the air. Here in the Northeast, 3885 kHz is the ‘hot spot’, and 3880 kHz is similarly used on the West coast.

The receiver front end is entirely conventional. …. Rather than wrestle with more stages of filtering or the use of ceramic filters, I reverted to a tried-and-true crystal filter. ……

The IF amplifier uses the so-called ‘cascode’ configuration…..

The following stage is a peak detector which serves to recover the modulation envelope from the received signal. Q3 is an ‘infinite-impedance detector’- a JFET biased near cutoff. I’d always wanted to say I’d used one- the phrase has a nice ‘Hitchhiker’s Guide’ ring to it…..

The audio output waveform is also peak-detected … and applied back …. as a form of Automatic Gain Control (AGC). Without it, nearby ‘Big Gun’ stations are easily capable of saturating this amplifier stage, yielding harsh-sounding clipped audio. …. With this feedback path in place, even the strongest of stations sounds fairly clean in the receiver.

The RF strip consists of a crystal-controlled Colpitts oscillator, a FET-driver IC, and a MOSFET Power Amplifier stage. The PA stage runs class-C to keep the transmitter efficiency reasonably high. Generating an amplitude-modulated output is done using one of the oldest tricks in the book: the transmitter’s supply voltage is varied by superimposing audio on it through … an inexpensive 48Ω:3.2Ω audio output transformer. ….

In theory, this method is simplicity itself….. The transmitter runs about 2W of carrier power and 6-7W peak output. I ran key-down tests of up to a half-hour duration- they showed minimal transformer warming.

One of the impediments to building an L-C oscillator (here used as the receiver LO) is that component tolerances make the resulting operating frequency somewhat uncertain. CW/SSB projects can usually count on a borrowed signal from a ‘big rig’ in the shack to locate and adjust the local oscillator to frequency. With AM, though, there’s no ‘beat note’, and you’ll probably hear an ‘in-shack’ AM signal everywhere you tune. The circuit block labeled ‘Test’ provides a built-in frequency adjustment tool. …. (Quotes taken from Dave K1SWL’s Kit Instructions)

It is listed in the ordering section of the main Small Wonders Lab Website.

I received a nice note from Dave K1SWL thanking me for my order. And I have to admit I am enthused to see it arrive; even more to do the build & get it on the air! 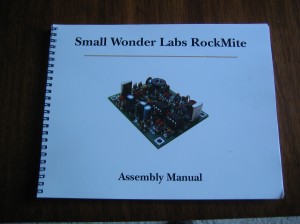 Scott NE1RD was very kind and gave me a copy at Dayton Hamvention 2008 at Contest University.

As is NE1RD’s custom he has done an ace job of making something moderately complex into something easy, by writing good directions laced with photos.

It is like having an injection of self-confidence for a neophyte builder to have a manual like this!

Here are the links:

Check out all of Scott NE1RD’s Project Websites and see if you can help in Developing Young Ham’s building experience through a club build!