I had a long chat with Milt Cram, W8NUE at AmQRP’s NUE-PSK Booth. Though I received the NEU-PSK modem I ordered under the early-bird program a few weeks before Dayton, I had made less than 20 QSOs with the unit and was eager to learn more.

Presently there is a firmware update that Milt W8NUE offered to install if I had my unit with me. (I didn’t)   Future Firmware Updates are planned to expand the ability of the modem!

Additional Modes and Logging Ability are high on the list.  Following the NUE-PSK reflector since Dayton some of these features are becoming reality, and again I need to get out the same interface I use with my Arduino boards to update firmware.

Fellow AmQRP team members were final assembling full kits for sale at the booth and demonstrating the modem to the gathered crowds of amateurs.

Not surprising that this excellent Modem Project has a personable and excellent team behind it!

Here are some of my previous articles on the NUE-PSK Modem:

This is an easy upgrade, much along the likes of loading an Arduino or Boarduino with a program.

Here are the release notes:

2) Some non-printable characters no longer print as “garbage” on display.

3) “Right Half Of Display Blanking” has been fixed by adjusting the timing of the control sugnals to the LCD.

4) Improved locking onto PSK signals on the spectrum.

5) Smoother interaction with the Tune encoder control, primarily with the menu slections under the Select pushbutton.

1) F10 for TX Toggle … F10 is now used to switch between Tx and Rx modes. (F12 was previously used for this, but using F10 is much more convenient for operators using the popular “2366” minikeyboards that require you to hold the Fn key to get to F11 and F12.)

2) Backspace … The backspace key now works as expected when recording macros or transmitting. It always worked as far as the outgoing signal was concerned, but the display did not show the cursor backing up by blanking the previously-typed character.

3) Ctrl-S (“Switch To Transmit”) … is now available for use as a special control character at the beginning of a macro. The control character is looked for when a macro button is pressed, even while in receive, If the character is found at the beginning of a macro, the modem will automatically switch to transmit, and continue to play the rest of the macro. This means that you can generate a macro for calling CQ that will switch the modem to transmit without having to use F10, call CQ and return to receive mode if the macro is ended with Ctrl-Q … all by using a single key press. This makes it possible to significantly reduce, or even eliminate, the need for pressing F10 when conducting a QSO.

a) “Current setting display” — When you dial up a configurable menu (Mode, Squelch, CwID, Backlight, PGA), the current setting is now shown. (Previously, the display always showed the first choice, regardless of another choice already being in effect.)

b) “Save Configuration” … A new menu item is available, one-position counter-clockwise from exit, whereby you can save the current settings to nonvolatile memory. Thus whatever changes made to the configurable items (Mode, Squelch, CwID, Backlight, PGA) will be automatically restored upon the next power-up.

6) Supply Voltage … is displayed in the splash screen on the display during power-up. Helpful when running on batteries to see the starting voltage level of the supply.

All the upgrades are well worth it – I plan to upgrade mine after the Dayton Hamvention when I have some more time.

Check out all the action at:  http://www.nue-psk.com/

The first three PSK QSOs I made with the new NUE-PSK Modem were:

Hooking the NUE-PSK Modem to a Yaesu FT-897 with LDG AT-897 Tuner and LDG FT Meter was a breeze.

Programing the Macros into the NUE-PSK is straight forward, with the one exception of the screen not being WYSIWYG during Macro Entry.  I have to dig into the documentation further, as perhaps there is a way to “look at” the raw Macro once entered.

More later this week once I get a fifty or so more NUE-PSK Modem QSOs logged.

As I had offered to wait and perhaps with that having been taken in accord, I’ve been patiently awaiting the arrival of the NUE-PSK unit I had ordered back in December.

Can’t say how pleased I am to report that they have caught up enough that the unit arrived in today’s mail!

AmQRP has had a huge project, with mine being in the first 500 production batch.

I had previously received the dedicated FT-897 cable and the spiral bound mini-manual.

I need to get my order in for the cabling to flash update the main PIC processor’s programing.

This weekend coming I’ll get a chance to give the unit a trial.  First impressions are very favorable – looks really neat!

Are my previous posts about this project!

More once I have a go at using the NUE-PSK Unit!

Someone asked earlier today about the number of modems that will all be out there by the end of the week … we produced 500 in this first round, and have another 1000 in the pipe for Round 2.

What a wonderful uptake for this project!  With 500 units in the first round and the quantity in the field tripling within a few months NUE-PSK-to-NUE-PSK PSK QSOs should be common pretty quick!

I’ve covered this modem before at: 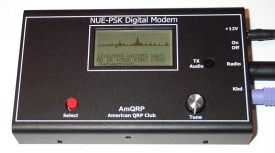 The very exciting new AmQRP NUE-PSK Modem is starting to ship.I’ve written about them before at:

AmQRP now has a dedicated website for the project at:

Per the latest website update the unit I ordered should ship in the next week.

The cable I ordered has already arrived.

I’ve also ordered a bound copy of the manual to keep with the NUE-PSK unit.

More once I get my hands on one!